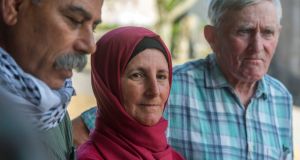 Fayez and Muna al-Taneeb meet farmer John O’Connell and other members of the community in Carrigaline, Co Cork, to share their story about the challenges of farming in the West Bank. Photograph: Michael Mac Sweeney/Provision

Last night, I welcomed two Palestinian farmers to Dublin. Mona and Fayez al-Taneeb have been living in the shadow of Israel’s illegal annexation wall since 2003, fighting against the demolition of their farm and the confiscation of their land by a commercial Israeli settlement.

The very presence of this settlement is a gross violation of international law, but this offers little consolation to the people whose lives hang in the balance. Encroachment continues, land is seized, and more than 40 per cent of the West Bank has now been taken, undermining the viability of a sustainable Palestinian state.

Mona and Fayez travelled all the way from the West Bank to meet ordinary Irish people – farmers and community groups from around the country that have been fundraising, holding public meetings and opposing this injustice. They took long flights overnight but insisted they weren’t tired; buoyed instead by the level of support in a country with its own history of struggle against occupation.

This afternoon they will be in Leinster House, watching as Seanad Éireann votes on the Occupied Territories Bill – legislation I tabled to end Irish trade in goods produced in illegal settlements in occupied territories, including those that are cutting Fayez and Mona’s land in half.

Though these settlements are repeatedly condemned as illegal by the European Union, United Nations and Irish Government, they continue to extract valuable natural resources and agricultural produce.

These goods are exported and sold on shelves around the world, including in Ireland, to keep the show on the road. There is a clear hypocrisy here – how can we condemn the settlements as “unambiguously illegal”, as theft of land and resources, but happily buy the proceeds of this crime?

I saw the impact of settlement expansion when I visited the West Bank this year: the restrictions on movement, the shrinking space for housing and healthcare, the lack of electricity. I witnessed the crushing indignity of a Palestinian community cut off from their water supply so that it could be diverted to an Israeli chicken farm. That commercial settlement, built on stolen land beyond internationally recognised borders, is a war crime. Is the moral response to condemn the illegality, but then ask how much for the eggs?

Ultimately, trade in settlement goods sustains injustice. We can criticise all we want, but years of empty rhetoric simply have not worked. As long as we buy their produce and they stay profitable, nothing will change.

The human cost is what concerns me: the little girl whose horizons are bounded by soldiers and a concrete wall, whose family suffers from deprivation because they can no longer farm their own land. The child who goes without eating because what was once food on the table is now harvested and sold around the world to pay for occupation.

I believe Ireland has a duty to oppose this, and ending trade in settlement goods is a clear, tangible way we can do so. It is not a radical demand: it seeks consistency in our foreign policy and disassociation from clear breaches of humanitarian law. It would not end trade in Israeli produce, only goods produced in settlements beyond its borders – long condemned by Ireland and its EU partners as illegal.

This distinction is important. Some argue that, as an EU member state, we cannot change trade policy unilaterally. But the legal permissibility of the Bill under EU and World Trade Organisation trade rules is outlined in detailed opinions by Michael Lynn, senior counsel in Ireland, and James Crawford, professor of international law at Cambridge University, sitting International Court of Justice judge and one of the world’s most eminent and authoritative legal scholars.

Given the illegality of the settlements, Ireland is entitled under article 36 of the Treaties of the European Union to disassociate from what the EU itself condemns as clear breaches of international law. The Bill is also drafted generally, applicable to occupations anywhere in the world, if the Oireachtas agrees and the evidence is there. The principle is the same: Ireland should oppose war crimes, no matter where they’re committed.

In many ways this legal back-and-forth reminds me of the brave Dunnes Stores workers in the 1980s, and concerns that banning produce from apartheid South Africa could upset EC rules. Ultimately, Ireland was willing to show leadership on that issue – to make the case internationally and chart a path for others to follow. The same applies today: we have the legal capacity to pursue this, if the political will is there.

This afternoon I will be calling on my Oireachtas colleagues to show that it is – to state firmly that Irish foreign policy will always stand on the side of international law, human rights and justice.

Frances Black is an Independent Senator and singer