Fionola Meredith: If Jeremy Clarkson’s vitriol is discrimination we are all victims 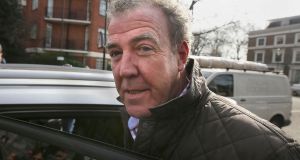 I’m no lawyer, but getting punched in the mouth so hard that you need hospital treatment seems like fairly clear grounds for a court claim. Does allegedly being called a “lazy Irish c***” by your assailant merit the same compensation? I don’t think so.

Irish Top Gear producer Oisín Tymon – who notoriously felt the force of Jeremy Clarkson’s fist, in an incident which lead to the presenter’s eventual dismissal – is suing Clarkson, together with the BBC, for both personal injury and racial discrimination. Tymon and his lawyers are seeking more than £100,000 in damages.

There’s no doubt that Tymon has suffered. A BBC investigation found that Clarkson subjected him to “an unprovoked physical and verbal attack”, during which he was “struck, resulting in swelling and bleeding to his lip”. The physical altercation was “accompanied by sustained and prolonged verbal abuse of an extreme nature”.

Nasty as it was, this was only the start of Tymon’s troubles. He was the target of death threats on social media by enraged Top Gear fans and, although he remains an employee of the BBC, apparently he hasn’t worked since the incident.

So I can see why Tymon, looking at his own unfortunate situation, then at Clarkson’s insufferably smug and swaggering attitude to his expensive new car show on Amazon, might feel sufficiently aggrieved to launch a case belatedly, months after the event.

It is interesting, and telling, that this was the particular epithet which came out of Clarkson’s mouth in a moment of heightened, red-faced disinhibition.

But invoking race hate isn’t the way for Tymon to go, even if it bumps up the money stakes. It would be different if he could demonstrate a sustained campaign of ethnically motivated bullying against him by Clarkson, on the grounds that he was Irish, and therefore useless. We’re talking, however, about a single, fleeting instance of vitriol.

To inflate this bully-boy rant to the level of “racial discrimination” undermines genuine instances of racially motivated hatred and gives a venal, opportunistic appearance to Tymon’s court action. Clarkson didn’t hit him because he was Irish. Clarkson hit him because he was hungry and childish and spoilt, and he wanted a hot dinner. Tymon’s ethnicity was just a convenient handle for the presenter’s rage.

In fairness, it’s not just roughed-up and disgruntled television producers who feel the need to reach for the “d” word. Increasingly it seems to be the default remedy for anyone who feels remotely offended or aggrieved, or even just plain challenged.

We see it in university students seeking to ban controversial speakers such as Germaine Greer, because of her “dangerous” views on trans-women, or Maryam Namazie, for speaking out against the Islamist movement.

We even see it in the deaf One Direction fans outraged because concert promoters wouldn’t provide them with a free on-stage sign-language interpreter.

Accusations of discrimination and discriminatory language are rife. The difficulty is that if you continually apply the term to anything that has the potential to give offence, it ends up becomes meaningless. By that flawed logic, catcalls in the street become morally equivalent to sexual assault; a casual racist remark is indistinguishable from a beating. It’s all discrimination and everyone’s a victim.

Of course, by brandishing the race card, Tymon and his legal team may be doing little more than increasing pressure on Clarkson and the BBC to settle fast, as well as settle substantially. Clarkson has repeatedly been accused of racist comments in the past and neither he nor his new bosses at Amazon will enjoy the inevitable rerun of Jeremy’s most cringe- inducing Top Gear moments should the case go to court.

Still, it illustrates the important difference between words and actions. Words – while sometimes hurtful or unpleasant – do not have the power to cause direct harm, or at least not in the way a smack in the chops does.

Clarkson might be suffering from a latent case of Hibernophobia, but he should pay compensation for the assault, not the insult.

1 Minister resigns over Dominic Cummings’ Covid-19 lockdown trip
2 What Courtney Love did straight after she left 1980s Dublin
3 The great unlocking: Top holiday destinations welcome back tourists
4 Richard Corrigan offers €90,000 wedding prize for frontline healthcare worker
5 We are ‘sale agreed’, but can we go back with a lower offer?
Real news has value SUBSCRIBE