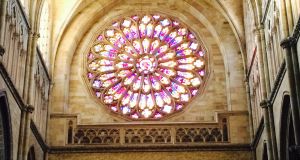 The 89-piece ‘Te Deum’ window by Wilhelmina Geddes at Ypres

Just down the street from where I stayed in Ypres last weekend, a tiny wall-plaque paid tribute to a group of Irish women, long gone now, who lived in the city for two-and-a-half centuries.

“Les Dames Irlandaises” were nuns – Benedictines to be exact. And their links to Flanders dated from Elizabethan times, when Ireland became a cold house for Catholics. By 1665, they had established their own abbey in Ypres where, as the plaque says, they “lived a life consecrated to God […] in prayer, work and education”.

They made a brief return home in the 1680s, encouraged by King James II. But after the Battle of the Boyne, despite an offer of tolerance from William III, they declined to remain under a “usurper” and, accepting only his letter of transit, returned to exile.

A century later, they survived the French revolution, although only just. They were ready to leave Ypres in 1794, after an order to close the abbey. Then a storm delayed their departure by a day, and when the weather was calmer, so was the revolution. There had been a power shift in Paris overnight – the “Thermidorian Reaction”. The nuns stayed.

They were still resident when Belgium became a country in 1831. And they were on the point of completing 250 years there when it fell to the Germans in 1914, bringing Britain and Ireland into the war.

Ypres was central to the Schlieffen Plan by which France would be invaded. So within weeks of the war’s declaration, the Germans were on the outskirts, and the Benedictines were bracing for the arrival of the “dreaded Uhlans” (a Prussian cavalry regiment).

When battle commenced, even St Patrick was deployed in the city’s defence. “As you once chased the serpents and venomous reptiles out of Ireland,” prayed the nuns, “please now chase the Germans out of Belgium.”

In the event, the Allied forces held Ypres, albeit at enormous human cost, as the “Ypres salient” was contested ferociously for the next four years.

But it was too late for the nuns. Their abbey, like the rest of the city, was destroyed in the early fighting. They fled for England, then Enniscorthy, and finally to the peace of Kylemore Abbey, Connemara, where Uhlans are rare.

Today, their former home on Sint-Jacobsstraat is occupied by a nondescript brick building, and the modest plaque looks all the more modest compared with the war memorials that are everywhere in Ypres. Nearby, just around a corner, is the biggest, the enormous Menin Gate, built by the British to hold the names of all their soldiers who died in the salient and had no known graves. Huge as it is, it was still too small. They could fit only 54,000 names. A further 35,000 are listed elsewhere

Amid all the military monuments, however, another Irish woman did leave her mark in Ypres, and it’s rather more spectacular than the plaque to the nuns. It’s also a war memorial, of sorts, although very different from the usual. To the casual observer, it’s the rose window of Ypres Cathedral.

The woman was Wilhelmina Geddes – Leitrim-born, Belfast-reared, and resident of Dublin during the revolutionary years, where she studied art with William Orpen and mastered stained glass at Sarah Purser’s co-operative, An Túr Gloine.

She moved to London in the 1920s, spending her later years there as a poor, emotionally disturbed, and (sometimes literally) starving artist. Partly because she was a social misfit everywhere she went, incapable of self-promotion, her output was smaller than it should have been. For the same reasons, she was soon forgotten (a magnificent 2015 book by Nicola Gordon Bowe has begun the process of reversing the neglect).

But at her best, she was considered the greatest glass artist of these islands. And her best includes the 89-piece Te Deum window at Ypres. Commissioned in 1935, as part of the cathedral’s post-war reconstruction, it took nearly as long to complete as the war itself.

Perhaps daunted by her forbidding name, the writer of an explanatory panel underneath refers only to “Miss Geddes”. She was indeed a miss, and although her sexuality is the subject of debate, she led a nun-like existence for much of her life – albeit that she was a Methodist, not especially religious, and had a weakness for having tea in Harrods and Harvey Nicholls.

Still, the departed Dames Irlandaises would have admired her window, at least, which as the translated panel says, in another understatement, commemorates the fallen soldiers of the “Big War”.

1 How much coffee should I drink? How much is too much?
2 Social Democrats to abstain on all votes for taoiseach as Dáil resumes
3 Gardaí investigating four-lane motorway sulky race
4 I decided that day if I start working for myself at least I'll know where I stand
5 Newton Emerson: Under what conditions would FF or FG share power with SF?
Real news has value SUBSCRIBE