Brian Boyd: The narcissism of taking offence by proxy 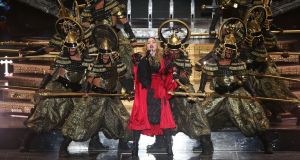 At a concert in Brisbane, the singer got 17-year-old Josephine Georgiou up on stage and, in front of the audience and millions watching online, pulled down Georgiou’s top to reveal her left breast.

Madonna crossed the line/ went too far this time/the fan should sue for sexual harassment etc – this was outrage in flagrante delicto.

But when Georgiou was asked about her humiliation in front of the watching world by Madonna, she calmly replied: “Only I get to decide if I’m humiliated or not."

Regardless, the professionally offended continued to take offence on Georgiou’s behalf; up to and including being offended that Georgiou herself wasn’t offended.

With their virtual pitchforks at the ready, the professionally offended appear to scour social media posts waiting for an opportunity to be offended on behalf of someone else.

Invariably they virtually march on well-known figures, like Pharisees flaunting their piety, demanding a retraction to enhance their online virtue signals.

And it doesn’t stop there; you can be offended by the wording of the apology or just ignore the apology and continue to be offended until something else catches your eye.

I speak with huge authority on this matter since on these pages last year I made the outrageously controversial comment that, all thing considered, I preferred old-fashioned beer to craft beer.

Someone went to the trouble of getting in touch with me to accuse me of “causing offence” (presumably to the craft beer drinking community) with my opinion.

I don’t think an apology to the craft beer drinking community will cut it here so I’ll throw in a hug as well.

In the dock at the moment is the Daily Telegraph columnist Allison Pearson. Yesterday, as Brussels was counting its dead she tweeted “Brussels, de facto capital of the EU, is also the jihadist capital of Europe. And the Remainders dare to say we’re safer in the EU! #Brexit”.

Pearson was accused of shamelessly pushing a Brexit political point on the back of the murder of innocent people.

The response to her tweet was almost identical to the one that met Mick Wallace’s tweet on the night of the Paris attacks.

Wallace tweeted on the night of the attacks “So terrible for the victims, but when is France going to stop its role in the militarisation of the planet?”

Just as with the reaction to Pearson yesterday, it was people horrified that some abstract political point was being made while innocent people were still fighting for their lives at the scene.

To paraphrase Georgiou, only you get to decide whether Pearson and Wallace were being crassly insensitive or making a valid contribution to an increasingly urgent debate.

The sublime narcissism of getting offended on other people’s behalf. Offence taking by proxy if you will.

A comedian walked into a bar (no, really), saw a woman on the dance floor and, having never met her before, approached her and said: “Whatever it is you’re looking for, you don’t need it”. The woman was the actress Olivia Wilde.

According to one journalist taking offence on behalf of Wilde, the comedian’s – Jason Sudeikis – remark was rude, condescending and creepy.

But, very inconveniently, Wilde loved hearing the uninvited comment from a complete stranger.

The couple now have a child together and are engaged to be married.

As deBoer points out “Wilde has agency and made her own adult decisions about the nature of Sudeikis’s pickup line and she is the sole and inviolate authority on her own life.”

As for those who take offence on behalf of others, he writes “the economy of offence is revealed to be just another expression of our ego. We need to remember that we are not the cosmos, that the world is full of other people making their own adult decisions.”

Telling Georgiou she should be offended by Madonna (accidentally it should be noted) revealing her breast to the world and that she should be luxuriating in victimhood and legal retribution is truly offensive to those who are actually sexually harassed.

Perspective and the functional ability to live in a world where people hold opposing views – however disagreeable – to our own, or the self-righteous screech of “I’m Offended” at every opinion met? You decide.

1 Co Donegal hotel offers €2 rooms to locals to circumvent Covid-19 outdoor dining rules
2 Traffic chaos as ‘singing and dancing’ woman stops car in middle of motorway
3 Mary McAleese: ‘I’m a bit of an ’oul interrupter. That’s what I hope to be’
4 Man with electric scooter who died in Meath was due to get married in the coming weeks
5 Blackrock and Mulhuddart: How Covid-19 affected two Dublin suburbs
Real news has value SUBSCRIBE