US military aims to slim down for peacetime footing 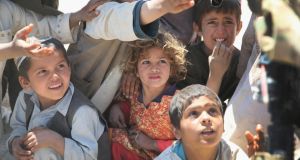 The proposed tightening of US military belts, the biggest change to America’s armed forces in generations, is recognition that the country’s military must adapt to the changing nature of warfare and threats to security, and rein in runaway defence spending as part of an overall deficit reduction.

Marking the first anniversary of his tenure in charge at the Pentagon, US secretary of defence Chuck Hagel announced plans earlier this week to reduce the size of the active-duty army personnel to as low as 440,000 from a peak of 570,000 in the period after the 9-11 attacks of September 2001. The reduction would leave the US army at its smallest size in 74 years, a level last seen the year before the US entered the second World War, as the country unwinds from 13 years of war in Iraq and Afghanistan.

“For the first time in 13 years we will be presenting a budget to the Congress of the United States that’s not a war-footing budget,” said Mr Hagel, a veteran of the Vietnam War and a former Republican senator from Nebraska. “That’s a defining budget because it starts to reset and reshape.”


Defence spending
Almost a fifth of US government spending, about $600 billion (€437.6 billion) of the $3.5 trillion federal budget in 2013, goes on defence spending. This dwarfs that of every other country’s military expenditure. In 2012, the US spent more than the combined military spending of China, Russia, the UK, Japan, France, Saudi Arabia, India, Germany, Italy and Brazil, according to Stockholm International Peace Research Institute.

Mr Hagel’s proposed cuts cap military spending at just under $500 billion in line with a cross-party budget compromise reached between President Obama and Congress in December.

“This is a budget that recognises the reality of the magnitude of our fiscal challenges, the dangerous world we live in, and the American military’s unique and indispensable role in the security of this country and in today’s volatile world,” said Mr Hagel, outlining spending plans for 2015 and beyond.

The Pentagon chief has warned that the army could face even deeper cuts, a reduction to 420,000 active-duty personnel, if across-the-board spending cuts known as “sequestration” are re-imposed in 2016 after being suspended for the 2014 and 2015 budgets under the congressional deal in December.

This would be an unacceptably low level for some. General Ray Odierno, army chief of staff, said in a speech at the Council on Foreign Relations earlier this month that the US army needs about 450,000 troops at a minimum and that 420,000 troops would be too small for an uncertain security landscape.


Stiff resistance
The cuts are likely to meet stiff resistance from Congress as Mr Hagel attempts to trim billions of dollars worth of housing allowances and other benefits for military personnel and by closing military bases in the home states and congressional districts of lawmakers.

He only has to look to the bipartisan backlash in Congress to about $6 billion in military pensions cuts contained in the cross-party December budget agreement to understand the strength of opposition he is likely to face.

The American public is equally divided on defence spending. A Gallup poll yesterday found 37 per cent said military spending was too high, while 28 per cent believed it was too low. Just over half of Democrats said that defence expenditure was excessive compared with 20 per cent of Republicans.


Changing threats
Mr Hagel has chosen to retire older military equipment designed for Cold War operations and to protect funding for cyberwarfare and special operations, reflecting the changing threats to US security.

The continued use of US missile strikes from remote-controlled drones to kill suspected al-Qaeda figures and other militants in Pakisan, Yemen and Somalia reflects the Obama administration’s preference to engage technologically-fought warfare that is far less costly in terms of economics and loss of American lives than a protracted, boots-on-the-ground conflict such as Iraq or Afghanistan.

“The administration believes it can fight wars via remote control,” said Bill Roggio, editor of The Long War Journal and a senior fellow at Washington think tank Foundation for the Defence of Democracies.

Roggio describes the use of drones as a “tactic masked as a strategy,” and that successes claimed by the administration on the drone campaign makes it easier to argue the case for fewer troops.

“It is cheaper. It is far more bloodless from the standpoint of US service personnel. It is also cheaper in the sense that you can show a result – look, we killed an al-Qaeda militant in a drone strike,” he said.