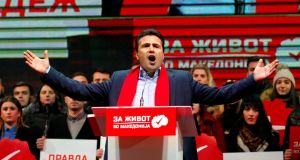 Macedonia’s Social Democrat leader Zoran Zaev: “We have seen what happened in Ukraine, Egypt, Libya and elsewhere. We have to take care here.” Photograph: Ognen Teofilvovski/Reuters 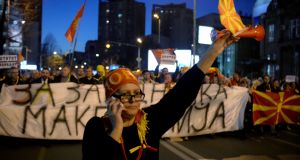 Protesters shout slogans during demonstrations against an agreement that would ensure the wider official use of the Albanian language, in Skopje, Macedonia, on Thursday. Photograph: Reuters

The man bidding to become Macedonia’s next prime minister has warned that any missteps could “set fire to the country”, amid street protests and a political standoff that have dashed hopes for an end to a crippling two-year crisis.

Social Democrat leader Zoran Zaev also said that he and parties from Macedonia’s ethnic Albanian minority may seek to form a government without the approval of the president, Gjorge Ivanov, who has refused to give a mandate to an alliance that he claims “threatens the sovereignty” of the Balkan state.

Mr Zaev said the president was “completely” acting in the interests of his ally Nikola Gruevski, whose nationalist party narrowly won last December’s elections but failed to find partners to secure a majority in Macedonia’s parliament.

Thousands of people have protested in the capital, Skopje, on recent nights against Mr Zaev’s proposed coalition, which would give greater rights to Macedonia’s ethnic Albanians and raise the status of their language.

Leaders of the minority parties visited Albania to formulate their reform plans with its prime minister, Edi Rama, in a move that angered many Macedonians and fuelled fears of ethnic strife in a country that almost plunged into civil war in 2001.

“In any normal democracy, a president with only ceremonial powers would give a mandate to form a government to those who have a majority,” Mr Zaev told The Irish Times in Skopje. “The president decided, using ridiculous excuses, not to give us the mandate. It is an unacceptable situation.”

Visiting Macedonia on Thursday, European Union foreign policy chief Federica Mogherini criticised Mr Ivanov and backed the claim of the Social Democrats and their ethnic Albanian allies – who together have 67 of parliament’s 120 seats – to try to form a government.

“I asked the president to reflect on the way forward and to reverse his decision in the interests of all citizens in this country,” Ms Mogherini said.

She also urged all political leaders in Macedonia to “scale down their rhetoric and avoid that this political and institutional crisis becomes an inter-ethnic conflict or, even worse, a geopolitical conflict”.

“This is a complex country in a complex region, and we live in complex times,” she added.

Mr Ivanov rejected her appeal, however, saying he could not give a mandate to anyone proposing “a platform of a foreign country, that is used to blackmail Macedonia, to jeopardise its sovereignty and independence . . . The citizens voted for European reforms, and not for a foreign platform revealed after the elections.”

With more protests planned for this weekend, the deadlock looks set to continue.

Mr Zaev revealed, however, that he and his coalition partners could bypass the president and seek parliamentary approval for a government without his backing – a move he said would be perfectly legal, if not ideal.

“We would like to get the formal approval of the president, but it is not essential. It is a nice tradition to ask your bride’s father for her hand in marriage, but if he won’t give it then you can still get married,” he said.

Such a move could infuriate supporters of Mr Gruevski, who ran Macedonia for almost a decade before stepping down last year. He has called on his compatriots to “mobilise” to defend the country, but many critics believe his real goal is to protect himself and his close allies from prosecution.

The crisis began two years ago, when Mr Zaev accused Mr Gruevski’s government of illegally wiretapping some 20,000 people, including many of Macedonia’s most powerful individuals.

The Social Democrat leader began releasing the recordings, which implicated some of Mr Gruevski’s associates in serious crime and corruption – allegations that they deny.

As part of a western-backed deal to resolve the crisis, a special prosecutor’s office was created to investigate cases based on the wiretap evidence. Under its mandate, it only has a few more months to press charges, leading Mr Zaev and many others to believe that Mr Gruevski and allies are desperately playing for time.

“Their big fear is that they will face criminal responsibility for their actions . . . They are willing to do everything, even obvious and shameful steps, to stop the democratic process and block the rule of law,” Mr Zaev said. “We stopped the regime at the elections, with pencils and ballots. There was no blood or violence. We have seen what happened in Ukraine, Egypt, Libya and elsewhere. We have to take care here.

“Our opponents are calling citizens into the streets to protest against Albanians and the multi-ethnic future of the country . . . I’m very afraid of this. That’s why we must take quick but careful steps. Now, in this atmosphere, it would be very easy to set fire to the country.”

As Ms Mogherini warned of a possible new geopolitical conflict in the Balkans, Russia waded into the crisis by accusing the West of trying to install a government in Macedonia that would help Albania pursue expansionist policies and lay claim to parts of Montenegro, Serbia, Greece and Macedonia itself.

“I’m afraid the intentions of our Russian friends are not good, and the latest statement from them shows that they are taking sides here,” Mr Zaev said. “We would be happy to co-operate with Russia, but there is no alternative to integration with the EU and Nato.

“It is easy to cause trouble in a multi-ethnic country like ours, in a region like ours.”