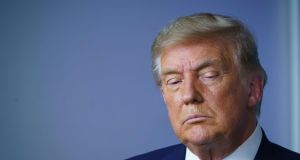 US president Donald Trump continued his attacks on the electoral system over the weekend, even as his campaign suffered a further blow in its attempt to overturn the result of this month’s presidential election.

A Pennsylvania court dismissed Mr Trump’s attempt to invalidate millions of mail-in ballots in the state – a case that was central to his campaign’s legal strategy.

Outlining the court’s decision on Saturday night, Judge Matthew Brann said the plaintiffs had used “strained legal arguments without merit and speculative accusations” that were “unsupported by evidence”.

The Trump campaign had argued that voters had been disenfranchised because of the decision by some counties to allow voters who had posted ballots to cast provisional ballots. But in the scathing 37-page opinion, the judge dismissed the claim.

“In the United States of America, this cannot justify the disenfranchisement of a single voter, let alone all the voters of its sixth most populated state,” he wrote. “Our people, laws and institutions demand more.”

The decision is the latest legal blow to Mr Trump’s efforts to change the results of the November 3rd election, which was won by his Democratic opponent, Joe Biden. It prompted Pennsylvania senator Pat Toomey, who previously insisted that Mr Trump had the right to pursue legal challenges, to accept that Mr Biden had won the election.

The Trump campaign has mounted about 30 legal challenges, the vast majority of which have been dismissed by courts across the country. Mr Trump would need to overturn the results in several states to win the presidency, a prospect that is virtually impossible.

Nonetheless, the outgoing president continued to make unsubstantiated allegations of massive voter fraud on Twitter throughout the weekend. As Liz Cheney, the third-highest ranking Republican in the House, urged the president to provide evidence of fraud or concede, Mr Trump wrote: “Sorry Liz, can’t accept the results of an election with hundreds of thousands of fraudulent votes cast, enough to easily flip the Election.”

Mr Trump also commented for the first time on president-elect Joe Biden’s preparations to assume the presidency. Amid expectations that Mr Biden would announce his cabinet picks, including treasury secretary, on Tuesday, Mr Trump wrote: “Why is Joe Biden so quickly forming a Cabinet when my investigators have found hundreds of thousands of fraudulent votes, enough to “flip” at least four States, which in turn is more than enough to win the Election?”

The president also made a call for state legislatures to overturn the election result in their states, ahead of the meeting of the college of electors on December 14th. Each state in the union will officially certify their results in the coming days and weeks, while some, including Georgia, have already done so. In Michigan, where officials are due to certify the state’s results on Monday, the head of the Republican National Committee, Ronna McDaniel, co-signed a letter asking the state’s board of state canvassers to delay the certification process for two weeks. Mr Trump hosted Republican members of Michigan’s state legislature at the White House on Friday. But in a blow to the president, the attendees issued a statement after the meeting indicating that Joe Biden would be declared the winner.

“We have not yet been made aware of any information that would change the outcome of the election in Michigan and as legislative leaders, we will follow the law and follow the normal process regarding Michigan’s electors, just as we have said throughout this election,” they said.