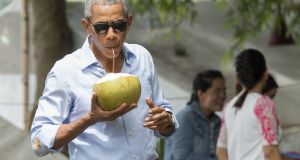 Barack Obama drinks from a coconut in Laos as the first visit by a US president to the southeast Asian country continued on Wednesday. He faced criticism in the US over payments to Iran. Photograph: Saul Loeb/AFP/Getty Images

The Obama administration has acknowledged that it paid $1.7 billion (€1.5 billion) in cash to Iran to settle a 37-year legal dispute, drawing more fire from Donald Trump and other Republicans over the payments.

The transfers were disclosed by US administration in January but new details emerging this week about the timing and the manner in which the money was paid has fuelled criticism that the payments amounted to ransom paid to Tehran for the return of American prisoners held in Iran.

US officials had previously acknowledged that the first $400 million was paid and delivered to Tehran by plane on January 17th – on the same day that four American prisoners, including Washington Post reporter Jason Rezaian, were flown out of Tehran’s Mehrabad Airport.

An Iranian cargo plane was not permitted by the US to leave Geneva with the $400 million on shipping pallets until the Americans had left Tehran, an exchange that coincided with last summer’s landmark nuclear deal between Iran and six world powers being finalised in Vienna.

The Wall Street Journal reported on Tuesday, sourcing its information from a congressional briefing given by Obama administration officials, that two more cash shipments – paid in Swiss francs, euro and other currencies – were delivered to Iran on January 22nd and February 5th.

The money was paid to settle a legal claim before the Hague international tribunal over the sale of military equipment dating back to 1979 when Iran and the US froze diplomatic relations.

Last month president Obama rejected claims that the $400 million payment in January amounted to ransom, telling reporters that the deal had been openly disclosed by his administration at the time they were made and “wasn’t some nefarious deal.” He stressed that the US did not have a policy of not paying ransom for the return of Americans detained overseas.

Two weeks later, a State Department spokesman admitted that the payments were used as leverage to ensure that the American prisoners were put on a plane out of Iran.

The US Treasury Department confirmed on Tuesday what Obama administration officials had told lawmakers in the Capitol Hill briefing: that the remaining $1.3 billion had paid in the same way as the initial $400 million payment – in cash and in non-US currencies – to Tehran.

The money was paid in currencies other than US dollars because of “the effectiveness of US and international sanctions regimes over the last several years in isolating Iran from the international financial system,” said a treasury spokeswoman.

The latest revelations about the cash payments provided new ammunition to Mr Trump in his criticism of Democratic rival Hillary Clinton, who was Mr Obama’s first secretary of state.

“Our country was blackmailed and extorted into paying this unheard-of amount of money as ransom and our president has lied to us,” said Mr Trump in a speech in Philadelphia on Wednesday.

The Republican’s remarks came in an address outlining his plans to strengthen the military ahead of separate TV interviews with him and Mrs Clinton at NBC’s “commander-in-chief forum” aimed at presenting their credentials as leaders on foreign policy and national security.

Florida senator Marco Rubio, a vociferous critic of the Iran deal, has proposed legislation that would seek the return of the $1.7 billion from Iran and bar future payments until Iran pays $55 billion adjudged by US courts to be owed to the American victims of Iranian terrorism.

“President Obama’s disastrous nuclear deal with Iran was sweetened with an illicit ransom payment and billions of dollars for the world’s foremost state sponsors of terrorism,” he said.