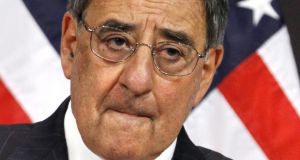 Leon Panetta, Barack Obama’s former secretary of defence and CIA chief, has criticised the president in a new memoir, saying that he too often “relies on the logic of a law professor rather than the passion of a leader”.

The third senior foreign policy official from Mr Obama’s administration to release a revealing book this year while he is still in office, Mr Panetta is as blunt as former defence secretary Robert Gates was in his book, Duty, and far more candid than former secretary of state Hillary Clinton who wrote her memoir Hard Choices in anticipation of a presidential bid in 2016.

The one-time CIA director, now 76, says in his book, Worthy Fights, published yesterday, that Mr Obama bore some responsibility along with Congress for federal spending cuts known as the sequester, which were a damaging byproduct of their failure to agree a budget in 2011.

“That episode highlighted what I regard as his most conspicuous weakness, a frustrating reticence to engage his opponents and rally support for his cause,” he writes.

“That is not a failing of ideas or of intellect – he is, as anyone who knows him can attest, supremely intelligent, capable of absorbing and synthesising complex information, and committed to a well-reasoned vision for the country. He does, however, sometimes lack fire.”

This weakness has given his opponents room to “shape the contours of his presidency, and they have used it to the detriment of the country,” says Mr Panetta, referring to the repeated votes by Republicans to unwind the Affordable Care Act and countless hearings on the 2012 attacks on the US outposts in Benghazi, Libya.

“Those challenges have encouraged the president’s caution and defensiveness, which in turn has emboldened further challenges,” he says.

The Italian-American, who backed Mr Obama’s rival, Mrs Clinton, to become president in 2008, was the president’s choice to lead the Central Intelligence Agency in 2009 and the Pentagon in 2011.

Mr Panetta found it amusing that some Obama critics see him as an ideologue when he views him as “a realist and pragmatist”. “But ‘playing it cool’ tends to take the edge off the rhetoric needed to stir people to action,” he says.

He believes presidents have succeeded most dramatically when they’ve passionately convinced people.

“I saw President Obama do that, but on occasion he avoids the battle, complains, and misses opportunities,” writes Mr Panetta.

Another source of criticism from Mr Panetta is Mr Obama’s failure to take military action against the regime of President Bashar al-Assad in 2013 when the Syrian leader used chemical weapons against his people. “The result, I felt, was a blow to American credibility,” he said, adding that when the US president as commander in chief draws a red line it is “critical” that he acts if that line is crossed.

“Assad’s action clearly defied President Obama’s warning; by failing to respond, it sent the wrong message to the world,” he writes.

Mr Panetta said in an interview on Monday publicising the book that Mr Obama “lost his way” in his response to the Syrian crisis and that the US would be in “a better position” in the fight against Islamic State militants if he had taken advice from his aides to arm moderate Syrian rebels in 2012. The US could also have pushed the Iraqi government harder to permit a residual force to remain in Iraq after the 2011 withdrawal.