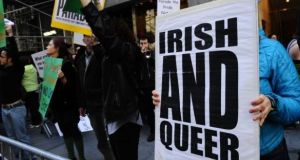 A file photograph of gay activists displaying signs along the St Patrick’s Day parade route in New York in protest at being excluded from the annual event. Photograph: Emmanuel Dunand/AFP/Getty Images.

Mr de Blasio confirmed that he would participate in the 255-year-old parade for the first time on March 17th now that America’s largest St Patrick’s Day parade has ended its long-standing ban and will permit gay groups to march in the Fifth Avenue parade past Central Park.

The Democrat refused to march in the parade in 2014, his first year as mayor, because of the prohibition on banners displaying gay pride. He skipped the parade again last year when one small lesbian, gay, bisexual and transgender group was permitted to participate.

“The St Patrick’s Day parade is a New York City tradition, but for years Irish LGBT New Yorkers could not show their pride,” Mr de Blasio said in an interview with Associated Press on Wednesday.

“Finally, they can celebrate their heritage by marching in a parade that now represents progress and equality.”

The first-term mayor will formal announce his participation in the parade at a press conference today hosted by Ireland’s consul general in New York, Barbara Jones, at the Irish consulate on Park Avenue.

Mr de Blasio will be joined by members of the Irish American Caucus on New York City Council and members of Irish LGBT group, the Lavender and Green Alliance, will also be in attendance.

More than 300 people will march this year under the banner of the group that has campaigned for the past two decades to overturn the ban.

When the group failed to convince the organisers to open up the parade to them, they set up a rival parade, the St Pat’s for All Parade, that takes place in Queens and in which Mr de Blasio has marched.

The Manhattan parade has become more liberal under new chairman, John Lahey, the president of Quinnipiac University in Connecticut. He has taken control of the event from the parade’s long-standing chairman John Dunleavy after a boardroom heave last year.

One group, called OUT@NBCUniversal, a gay organisation at NBC television, which broadcasts the parade every year, was permitted to participate in the 2015 parade and carry gay pride banners but Mr de Blasio felt that the organisers did not go far enough.

Former US senator George Mitchell, who chaired the Northern Irish peace talks leading to the 1998 Good Friday Agreement, is the grand marshall of this year’s parade, but is not expected to attend today’s press event with the mayor because he is out of town.

The two Grand Marshalls of the St Pat’s For All Parade in Queens, Irish-American philanthropist Loretta Brennan Glucksman and author Colum McCann are expected to attend today’s formal announcement.

Mr de Blasio plans to march in the first portion of the parade with police officers, firefighters and other members of the city’s uniformed services, and later under the Lavender and Green Alliance’s banner.