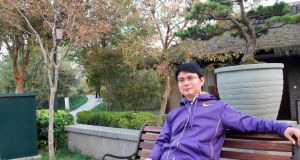 An undated photo of Chinese billionaire Xiao Jianhua who was allegedly taken by the Chinese police from his apartment at the Four Seasons Hotel in Hong Kong and spirited across the border. Photograph: The New York Times. 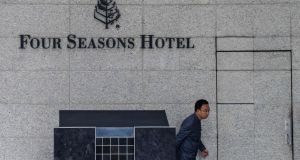 A member of staff outside the Four Seasons Hotel in Hong Kong from which Chinese billionaire Xiao Jianhua, founder of Beijing-based Tomorrow Group, was allegedly taken from his apartment by Chinese police. Photograph: Anthony Wallace/AFP/Getty Images.

A billionaire with links to the family of China’s president Xi Jinping was reportedly taken from his apartment in the Four Seasons in Hong Kong by Chinese police and brought to the mainland.

Xiao Jianhua, one of China’s richest men, was taken into police custody on the mainland, the Financial Times and New York Times reported.

He may be assisting with a graft investigation, part of the Chinese president’s sweeping campaign that critics say is more about consolidating power than tackling corruption.

If Chinese police were involved in Mr Xiao’s abduction from Hong Kong, it would appear to violate the former British colony’s mini-constitution, which only permits the Hong Kong police to operate in the territory.

Mr Xiao was born in China, is a Canadian citizen and holds a diplomatic passport from Antigua and Barbuda, reports said. He was living in a luxury apartment at the Four Seasons but a group of plain clothes Chinese security agents allegedly escorted him from the hotel across the border to the mainland. There was so sign of a struggle on CCTV footage taken at the hotel.

Mr Xiao denied he had been abducted in two posts on his company’s social media account, but by Wednesday both had been deleted.

“Regarding the reports on me in recent days, I have to say that I, Xiao Jianhua, have been recovering from an illness outside the country,” he said in one of the posts. He said he had “not been abducted”, according to the statement that was quoted in Chinese state media.

In another statement, he denied doing anything to harm China’s ruling Communist party or working with any “opposing forces or organisations”.

Hong Kong police received a request for assistance on January 28th, but Mr Xiao’s relatives attempted to withdraw the case a day later, the police said in a statement.

“The police investigation continues and we have asked relevant mainland departments to assist with following up on the situation of the victim in the mainland,” the statement said, without directly naming Mr Xiao.

The case comes about a year after five Hong Kong-based booksellers that published salacious tales of China’s leadership were detained by Chinese security forces.

Two of the men were spirited across borders without any formal extradition, one from his holiday home in Thailand and another off the streets of Hong Kong is a fashion similar to Mr Xiao.

The booksellers case unsettled many in the city, which has a separate legal system and greater freedom compared to China under an agreement known as “one country, two systems”, while Mr Xiao’s disappearance is sure to stoke fears Hong kong is losing its autonomy.

Mr Xiao controls Tomorrow Group, a holding company with stakes in real-estate, insurance, coal and cement firms and his wealth is estimated to be about 40 billion yuan (€5 billion), according to wealth tracker Hurun Report.

In 2014 he admitted to the New York Times that he helped the family of President Xi dispose of assets but said they “didn’t make any extra profits through their family clout”.