Hillary and Bill Clinton made $30 million over 16 months 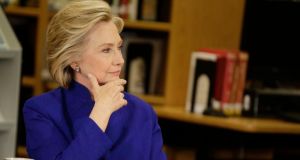 Hillary Clinton and her husband made at least $30 million (€26 million) over the last 16 months, mainly from giving paid speeches to corporations, banks and other organizations, according to financial disclosure forms filed with federal elections officials on Friday.

The sum, which makes Ms Clinton among the wealthiest of the 2016 presidential candidates, could create challenges for the former secretary of state as she tries to cast herself as a champion of everyday Americans in an era of income inequality.

The $25 million (€22 million) in speaking fees since the beginning of last year continue a lucrative trend for the Clintons: They have now earned more than $125 million (€109 million) on the circuit since leaving the White House in 2001.

In addition, the report shows, Clinton reported income exceeding $5 million (€4.4 million) from her memoir of her time as secretary of state, Hard Choices. The Clintons’ riches have already become a subject of political attacks, and her campaign has been eager to showcase Clinton as a more down-to-earth figure.

Her only declared Democratic opponent at this point, senator Bernie Sanders of Vermont, is an avowed socialist, while Republicans like senator Marco Rubio of Florida and governor Scott Walker of Wisconsin have considerably more modest means.

A major dimension of Clinton’s candidacy is expected to be policy proposals to narrow the gap between the rich and poor and to address stagnant wages. Yet she is far from those problems; while she said she and former President Bill Clinton were “dead broke” when they left the White House in early 2001, they are now part of the American elite.

The report makes clear that Hillary Clinton, since leaving the State Department, has joined the family speechmaking business with gusto. But Bill Clinton can still command higher fees than his wife, collecting about an average of about $250,000 (€218,000) per speech to $235,000 (€205,000) for Hillary Clinton.

Of Hillary Clinton’s speeches, 10 were delivered to audiences outside the United States, but they were not nearly as far-flung as those by her husband over the years.

Nine were to Canadian groups: the Canadian Imperial Bank of Commerce in Whistler, British Columbia; trade organizations in Montreal and Vancouver; the think tank Canada 2020, which generates socially progressive policy; and five organized by the events firm tinePublic Inc. The 10th speech was to a health care company audience in Mexico City.

The disclosure forms cover January 1st, 2014 to May 14th of this year. They show that even as his wife has begun her pursuit of the presidency, Bill Clinton has shown no signs of slowing down: He gave three speeches in recent days, including one Wednesday for the American Institute of Architects in Atlanta, and two on Tuesday in New York - one for Univision Management and one for Apollo Management Holdings.

The disclosure forms do not reveal what taxes the couple paid on their income, but a campaign official who requested anonymity said they had paid an effective tax rate of about 30 per cent.

Hillary Clinton’s last filing, which covered her final years as secretary of state, disclosed more than $16 million in income. Most of the money, mainly covering 2012, stemmed from about 70 honorariums for Bill Clinton.

The Clintons have come under increasing scrutiny for their financial activities since she announced her run for president last month. Much of the attention has been focused on the Clinton Foundation and the donations it received from foreign entities while she was secretary of state. But the couple has also faced criticism for giving highly paid speeches to certain groups, particularly the financial industry.

The speaking circuit has enriched many well-known Washington figures and former presidents, but the exorbitant pay for light work can distance them from the realities most Americans experience at their jobs. In one case, the report shows, Hillary Clinton received $100,000 (€87,000) for a speech to the California Medical Association - by satellite.