Among the dead were a police officer, a doctor and a pharmacy employee

A gunman at a Chicago hospital killed a police officer and two others before dying in the shooting, which sent doctors and patients streaming out of the facility. Video: Reuters 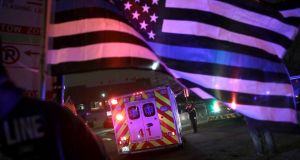 Chicago’s hospitals have grown all too accustomed to receiving victims of gunshot wounds from unrelenting violence on the streets, but on Monday, one hospital became the scene of a shooting that left four people dead and sent health workers and patients alike scrambling for safety.

As a frantic scene played out inside and outside Mercy Hospital, south of Chicago’s downtown, four people were shot and killed, Superintendent Eddie Johnson of the Chicago Police said.

Among the dead, according to Mayor Rahm Emanuel, were a police officer, a doctor and a pharmacy employee. The gunman, who was not identified, was also killed; officials said they were uncertain whether the fatal shot had come from the police or by his own hand.

Police said the officer killed was Samuel Jimenez, a father of three who had joined the Chicago Police Department last year and recently finished his probationary period.

Hospital officials identified the other victims as Dr Tamara O’Neal, 38, an emergency room physician who was deeply involved with her church, and Dayna Less, 25, a first-year pharmacy resident.

“Our first goal was to start grabbing patients out of the rooms,” said Clarence Smith, a hospital worker who described evacuating four patients, including one in a wheelchair, during the chaotic and frightening minutes that followed a cascade of gunshots.

“You don’t know if the active shooter is down the hall or not. You had to put the blinders on and just keeping moving forward, and that’s what I did.”

Officials said that the shooting began in the parking lot of the hospital just before 3.30 pm local time. A man began arguing with a female doctor with whom he had had a relationship. When someone intervened, the man lifted his shirt and showed a handgun, Johnson said.

Seconds later, the man shot and killed the doctor and fired at arriving police officers, Johnson said. The man then ran inside the hospital, followed by police officers. For several minutes inside, as witnesses ducked and screamed, he exchanged gunfire with officers.

Johnson said the man killed Jimenez and a pharmacy worker who had stepped off an elevator and who was not involved in the original dispute. Amid the gunfire, a second police officer’s holster was damaged by a bullet, though the officer was not injured.

Inside the emergency room, witnesses said, more than 20 patients were waiting for treatment. A Chicago police sergeant told everyone to stay down, according to Steven White, a patient who was being treated in the emergency room at the time.

“He was shooting in the back and all the women started yelling and the kids started crying,” White said. “That’s when the sarge came in, and said, ‘Stay down.’”

At that point, workers tried to usher ill patients outside to safety. Others hid, huddled in hospital rooms. Officers and emergency vehicles streamed into the area near Michigan Avenue and 26th Street, and people were warned to stay away. Inside the hospital, teams of police officers could be seen darting down hallways, searching room by room.

Joan Fortune, a pharmacist who works at the hospital, said she had been talking to a customer about cough medicine when he asked whether she had heard about the shots being fired.

Immediately, she said, a technician closed the rolling shutter to the pharmacy, locked the door and ran to a back area.

“We just sat there,” she said. “We heard arguing. We heard more shots.” When the gunman entered the hospital, she said, he was about 10 or 15 feet away from her at one point, though separated by two sets of doors. After they huddled in silence for about 30 minutes, she said, police officers banged on the door and said it was safe to come out, guiding them outside.

Around the hospital, streets were shut down for several blocks in all directions. Scores of police cars, marked and unmarked, filled the neighborhood, along with firetrucks and ambulances.

“Those officers that responded today saved a lot of lives,” said Johnson, who said his department had trained for hospital shootings.

“We just don’t know how much damage he was prepared to do.”

In a news conference outside a different Chicago hospital, Emanuel said the incident “tears at the soul of our city.”

“It is the face and the consequence of evil.

“You see it on TV, you know, movies and stuff, but you never see someone sit there and turn around coldhearted and shoot somebody while they’re still on the ground,” White said.

“It’s just sad. It’s Thanksgiving and we have to go through this in Chicago once again.” – New York Times