Donald Trump hits back at James Comey after scathing testimony

Former director of the FBI accuses the Trump administration of defamation during his testimony to the US senate intelligence committee. Video: C-Span 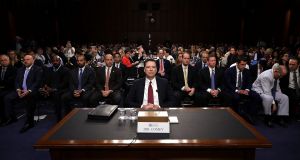 A defiant Donald Trump hit back at damaging testimony delivered by fired FBI director James Comey on Thursday, denying claims he had requested Mr Comey’s loyalty and refuting allegations of interference into an FBI investigation.

In a statement delivered through his personal lawyer, the US president said that he had never “in form or substance, directed or suggested that Mr Comey stop investigating anyone”, including former national security adviser Michael Flynn. He also said that he had not requested Mr Comey’s “loyalty”, as claimed by Mr Comey.

His comments contradicted key arguments made by the former FBI director during a two-and-a-half hour hearing at the US Senate, significantly upping the stakes in a controversy that is threatening to engulf the president.

While Mr Comey confirmed that the US president was not personally under investigation as part of the inquiry in to Russian meddling in the 2016 election, he claimed that Mr Trump had sought to influence the investigation by asking him to “let go” the FBI inquiry into former national security adviser Michael Flynn at a meeting on February 14th. Mr Comey said that Mr Trump made the comments after he asked other officials to leave the room.

Should the president’s actions be perceived as an obstruction of justice, this could lay the ground for impeachment proceedings, though Mr Comey stopped short of stating that the president had obstructed justice, saying it was a matter for special counsel Robert Mueller.

With Republicans controlling the US Congress, any move to impeach the president would need the support of Republicans. So far the party has broadly backed the president, with most Republican members of Congress who were present yesterday saying they believed that Mr Comey’s testimony did not prove that the president was guilty of obstructing justice.

During the explosive public hearing at the US senate, beamed live across the nation from Capitol Hill, Mr Comey accused the White House of spreading “lies” about him and the organisation he formerly headed.

He said that the administration “chose to defame me and more importantly the FBI by saying that the organisation was in disarray, that it was poorly led. These were lies plain and simple”.

“I was honestly concerned he might lie about our meeting,” he said.

“I knew that there might come a day when I would need a record of what had happened, not just to defend myself, but to defend the FBI.”

He also said that he believed he had been fired by the president because of his handling of the Russian investigation.

Mr Comey also confirmed that he had shared a memo detailing a meeting with Mr Trump to the press through a friend but did so in the hope that a special counsel might be appointed. The admittance was seized upon by Mr Trump’s lawyer, Marc Kasowitz.

“It is overwhelmingly clear that there have been and continue to be those in government who are actively attempting to undermine this administration with selective and illegal leaks of classified information and privileged communications,” said Mr Kasowitz. “Mr Comey has now admitted that he is one of these leakers.”