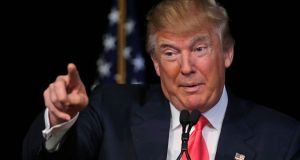 Just days after an unusually gracious speech after the Republican caucus, the property mogul renewed his attacks on Mr Cruz, the winner in Iowa, ahead of Tuesday’s primary in New Hampshire.

Mr Trump has claimed that the senator “stole” the Republican caucuses and accused him of “fraud” because his campaign issued a release to say that another conservative candidate, retired surgeon Ben Carson, had left the race and voters then turned to the Texan.

He also claimed that Mr Cruz’s campaign sent out a notification to Iowans warning that not caucusing on Monday would be a violation.

At a rally in Exeter, New Hampshire, Mr Trump continued his anti-establishment rants with a more ferocious attack on the Republicans running against him.

At another campaign event in Arkansas on Wednesday night, Mr Trump jabbed at his opponent, claiming that he was dishonest and helped push for the confirmation of US supreme court chief justice John Roberts, who voted for president Barack Obama’s healthcare law.

“Ted Cruz gave us Obamacare,” said Mr Trump of the health insurance scheme so despised by Republicans, which in fact prompted Mr Cruz and other conservatives to shut down the government in 2013.

Mr Cruz (45) was not a senator in 2005, when Mr Roberts was confirmed, but he did support him when he was then Texas’s solicitor general.

Mr Cruz said the businessman does not like losing and threw a “Trumpertantrum” after coming second in Iowa.

Ahead of the pack

At an event in New Hampshire on Thursday, Mr Cruz said that Mr Trump was “very rattled right now” after losing in Iowa.

New Jersey governor Chris Christie intensified his attacks on Mr Rubio, whose surprisingly strong third-place showing in Iowa makes him a target as the establishment favourite to challenge Mr Trump and Mr Cruz.

Mr Christie, who is trailing in sixth place in the New Hampshire polls, mocked Mr Rubio as a mollycoddled “boy in the bubble” while dismissing his record in the Senate.

A “Super PAC” supporting former Florida governor Jeb Bush, who is fifth in New Hampshire’s polls with 9 per cent, has been running attack ads against Mr Rubio.