Bernie Sanders, who Hillary Clinton referred to as a 'pretty reliable vote for the gun lobby', defends his record on firearms during the US Democratic Party’s fourth live televised debate in South Carolina. Video: CNN 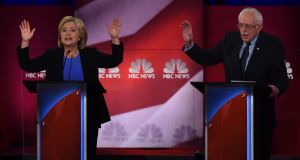 Mrs Clinton, the party’s favourite in national polls, sharpened her tone against Mr Sanders as they met for the Democratic Party’s fourth live televised debate from South Carolina ahead of the Iowa caucuses, the inaugural presidential nominating election on February 1st.

Polls show Mr Sanders and the former secretary of state in a dead heat in Iowa, where Mrs Clinton once held a strong advantage. The socialist senator for Vermont has extended his lead in New Hampshire, the second nominating state to vote in a primary on February 9th.

Rising support for Mr Sanders in the first two voting states has put Mrs Clinton on the back foot and set the stage for a more heated debate between the candidates than the three previous encounters.

Martin O’Malley, the former governor of Maryland who trails them both by some distance, also participated in the debate.

Mr Sanders, whose policies were the focus of much of the debate, came under fire early on when asked about Mrs Clinton describing him as a “pretty reliable vote for the gun lobby” and about his reversal to support a bill challenging immunity from lawsuits for gun makers and dealers.

He accused the former first lady of being “very disingenuous” saying that he has a “D-minus” voting record for the National Rifle Association and that he lost an election in 1988 when he stood up to the gun lobby.

On his most vulnerable front, Mr Sanders was challenged by Mrs Clinton for being soft on guns and for voting for “the Charleston loophole” that permitted the man accused of killing nine people at a black church in the South Carolina town to buy the gun for the June 2015 attack.

Mrs Clinton jabbed Mr Sanders again on his plan to introduce universal healthcare saying that he wanted to replace Obamacare, the healthcare law that the president fought Republicans hard to pass.

“I don’t want to see us start over again with a contentious debate. I want us to defend and build on the Affordable Care Act and improve it,” she said to applause from the audience at the NBC-hosted debate.

Mr Sanders responded saying that the Clinton camp’s claims that he wanted to end existing healthcare programmes was “nonsense”.

“We are not going to tear up the Affordable Care Act. I helped write it. But we are going to move on top of that to a Medicare-for-all system,” he said, defending a policy Mrs Clinton has attacked him repeatedly on.

The self-described democratic socialist hurt Mrs Clinton most on her close ties with Wall Street, pointing out that she had received more than $600,000 (€550,700) in speaker fees from Goldman Sachs in one year and questioning whether this would affect her policies on the financial sector.

“Can you really reform Wall Street when they are spending millions and millions of dollars on campaign contributions and when they are providing speaker fees to individuals?” Mr Sanders said.

Throughout the debate, Mrs Clinton presented herself as a pragmatic alternative to the idealistic Sanders, trying to undermine the policies of the 74-year-old senator and show herself as a more electable contender.

She also cast herself as the natural heir to the Obama administration, defending the president’s record and trying to portray Mr Sanders as an opponent of Mr Obama, attempting to drive a wedge between the senator and his progressive supporters who admire the president.

Mrs Clinton highlighted how Mr Sanders had criticised Mr Obama for taking donations from Wall Street and had sought a primary challenger in 2011 to contest the president’s re-election four years ago.

Mr Sanders listed several moments when he and Mr Obama supported each other. He describing himself and the president as “friends,” though he admitted that they had “some differences of opinion”.

“Your profusion of comments about your feelings towards President Obama are a little strange given what you said about him in 2011,” Mrs Clinton said in response.

Unlike previous debates, there was less focus on the Republican presidential candidates, except for few notable digs at the party’s frontrunner Donald Trump, including over his denial of climate change.

“It is beyond my comprehension how we can elect as president of the United States somebody like Trump who believes that climate change is a hoax invented by the Chinese,” said Mr Sanders.

Despite Mrs Clinton’s attacks, the Vermont senator’s forceful responses are likely to have struck a chord with the party’s liberal grassroots who have been swept up by his insurgent campaign.

The next Democratic presidential debate takes place in Milwaukee on February 11th, two days after the New Hampshire primary.