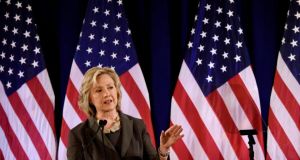 Former US secretary of state Hillary Clinton said she was concerned about “a lot of inaccuracies’’ in the reporting on her personal email account. Photograph: Justin Lane/EPA

Four emails in the personal email account that Hillary Rodham Clinton used as secretary of state contained classified information, Government investigators said in a letter to Congress released on Friday.

The investigators discovered the four emails while reviewing a sampling of 40 emails from Ms Clinton’s account. Of those, four contained information that should have been marked classified and should have been sent and stored on a secure computer system, I Charles McCullough III, the inspector general of the intelligence community, the internal watchdog for the nation’s intelligence agencies, said.

The emails were routed through a private email server that Ms Clinton set up in her home. Critics and security experts have questioned whether the practice made government secrets more vulnerable to security risks and hacking.

A spokesman for Clinton’s campaign released a brief statement on Twitter, saying: “Any released emails deemed classified by the administration have been done so after the fact, and not at the time they were transmitted.”

The discovery of the four emails has prompted the inspector general to refer the matter to FBI counterintelligence agents, who investigate crimes related to mishandling classified information. On Thursday night and again on Friday morning, the Justice Department referred to the matter as a “criminal referral” but later on Friday dropped the word “criminal.”

Regardless of the terminology, the referral raises the possibility of a justiced epartment criminal investigation into Ms Clinton’s emails as she campaigns for president.

Justice department officials said no decision had been made about whether to investigate. Since Ms Clinton’s use of a private email account for official state department business was revealed in March, she has repeatedly said she had no classified information on the account. State department officials, however, told the inspector general that the account potentially contained hundreds of classified emails. When Mr McCullough’s investigators performed the spot check of 40 emails, he said, 10 per cent contained classified information.

A second inspector general, this one for the state department, is also investigating the department’s handling of Ms Clinton’s emails. The two inspectors general have sent Congress a series of memos, including one dated June 29th that said Ms Clinton’s private account contained “hundreds of potentially classified emails.” The memo was written to Patrick F Kennedy, the undersecretary of state for management.

At issue are thousands of pages of state department emails from Clinton’s private account.She has said she used the account because it was more convenient, but it also shielded her correspondence from congressional and Freedom of Information Act requests.

She faced sharp criticism after her use of the account became public, and subsequently said she would ask the state department to release her emails. The department is now reviewing some 55,000 pages of emails. A first batch of 3,000 pages was made public June 30th.

In the course of the email review, state department officials determined that some information in the messages should be retroactively classified. In the 3,000 pages that were released, for example, portions of two dozen emails were redacted because they were upgraded to “classified status”. But none of those were marked as classified at the time Ms Clinton handled them.

Ms Clinton meanwhile said on Friday that she would stay focused on the issues at the heart of her presidential campaign, and that she was concerned about “a lot of inaccuracies’’ in the reporting of her personal email account. “Maybe the heat is getting to everybody,’’ she said at a campaign event at New York University. “We are all accountable to the American people to get the facts right, and I will do my part,” she added. “But I’m also going to stay focused on the issues, particularly the big issues, that really matter to American families.” – (New York Times service)