‘Most anticipated and feared’ book of the presidential cycle, published by a Murdoch subsidiary, alleges that US policy decisions helped Clinton charity donors 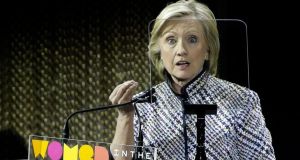 Hillary Clinton speaks at the sixth annual Women in the World Summit in New York on April 23. (AP Photo/Julie Jacobson)

It is hardly Machiavellian to state that the strongest political candidate draws the fiercest attacks. The salvos being fired at 2016 presidential contender Hillary Clinton are flying because she is Democratic frontrunner by some distance, but they are landing on one of her weakest flanks: money.

This week the bombshells – previews from an impending book called Clinton Cash: The Untold Story of How and Why Foreign Governments and Businesses Helped Make Bill and Hillary Rich – lit up the political sky and drew retaliatory strikes from Clinton’s camp.

Just so it is clear what side he is on, author Peter Schweizer, a conservative, is a former speechwriter for president George W Bush. The thrust of his allegations builds on earlier reporting by the Wall Street Journal about the vast sums of money passing through Clintonworld.

The Journal, incidentally, is published by Rupert Murdoch’s News Corp, which is also publishing Schweizer’s book through subsidiary HarperCollins.

Schweizer claims that while Hillary Clinton was secretary of state in Barack Obama’s first-term administration (2009 to 2013), the Clinton Foundation, the family’s charity, was accepting donations from foreign interests and that contemporaneous policy decisions were being made at the State Department benefiting those foreign donors.

The Washington Post reported this week that Bill Clinton was paid more than $100 million for speeches between 2001 and 2013, including at least $26 million by groups that donated money to the foundation. The Wall Street Journal reported in February that at least 60 foundation donors lobbied the State Department while Hillary was secretary of state.

Schweizer’s book goes further, alleging direct links between the money and State Department policy decisions under Hillary. The New York Times, which with the Washington Post and Fox News had exclusive access to the book ahead of its May 5th publication, described it on Monday as “the most anticipated and feared book” of the presidential cycle so far.

Frank Giustra, the founder of the Canadian company that profited from the deal, donated $31 million to the Clinton Foundation and flew Bill Clinton to Kazakhstan in 2005 when the country was mulling whether to grant mining rights to Giustra’s firm.

Clinton was paid $500,000 by a bank affiliated to the Russian company Rostacom to travel to Moscow in 2010 at a time when Rostacom was attempting to buy the Canadian company.

Giustra has rubbished the paper’s findings, while Clinton spokesman Brian Fallon said Hillary had no role in approving the firm’s sale and has described the book as a “forthcoming smear project.”

The Wall Street Journal reported this week that O’Brien won a $2.5 million award in 2011 from a programme run by a State Department agency to provide mobile money services in Haiti after the earthquake.

O’Brien’s spokesman has confirmed that the billionaire gave the money but has declined further comment. O’Brien and Bill Clinton have worked closely on Haiti’s recovery, and the Irish businessman is a regular at the Clinton Global Initiative annual meeting in New York.

One of the biggest Irish contributors is Irish Aid, the Government’s overseas development fund. The foundation lists its donation at between $5 million and $10 million.

The Department of Foreign Affairs said this money was provided to the Clinton Health Access Initiative, a charity affiliated with the foundation, for work on health promotion projects in Mozambique (€1 million) and Lesotho (€4 million) between 2011 and 2014. A further €170 million of Irish Aid went to the health ministries in those countries on projects that involved personnel from the Clintons’ health charity.

Money is a touchy subject for Hillary Clinton. She is trying to win over grassroots Democrats on the left in her fledging campaign by selling herself to voters as a “champion for everyday Americans” and making income inequality between the top 1 per cent and everyone else a touchstone issue.

Selling herself as more Main Street than Wall Street will require distance from her family’s big corporate benefactors in that 1 per cent. That will prove difficult if questions continue to be asked about the Clinton cash.