A video posted on Facebook captures the moments after a man, Philando Castile, was shot by police in Minnesota. Police have confirmed he died from his wounds. 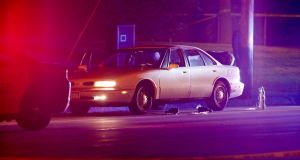 A car at the scene of a shooting of a man involving a St Anthony police officer in Falcon Heights, Minnesota on Wednesday. The officer involved has been put on leave, said the interim chief of the St Anthony police. Photograph: Leila Navidi/Star Tribune via AP

A Minnesota man was fatally shot on Wednesday night by the police in a St Paul suburb, and the aftermath was captured in a grisly video recorded by the car’s front-seat passenger and streamed live. It was at least the second shooting this week of a black man by police officers, and parts of both encounters were recorded on video.

The video, which begins after the shooting itself, shows the man slumped bloody against the woman who was recording it. Her young daughter sat in the back seat. The footage was extraordinary in that the woman narrated what was happening as she trained the camera on the man, whom she described as her boyfriend, and on at least one officer who was pointing a gun through the driver’s side window.

“Please, officer, don’t tell me that you just did this to him,” she said. “You shot four bullets into him, sir. He was just getting his licence and registration, sir.” The woman’s daughter, who was in the back seat, appears several times in the video. Near the end of the 10-minute clip, as the two are sitting in the back of a police car, she comforts her mother, saying, “It’s okay, Mommy. It’s okay. I’m right here with you.”

The video streamed live on a private Facebook account belonging to Lavish Reynolds, and the clip passed rapidly among Twitter and Facebook users, becoming significant news online before traditional outlets – even those in the Minneapolis area – caught up.

The police confirmed the shooting but did not release the names of the man or the officers involved. The Star Tribune of Minneapolis reported that the man was Philando Castile, a 32-year-old cafeteria supervisor at a Montessori school in St Paul.

The officer involved has been put on leave, said Jon Mangseth, the interim chief of the St Anthony police. In the video, the woman explains that after being pulled over for a broken taillight, her boyfriend was shot several times while reaching for his licence. She says her boyfriend told officers before the shooting that he had a gun in the car.

In the background, one of the officers can be heard shouting, “I told him not to reach for it. I told him to get his hands up.” The video was briefly removed from Facebook but was later restored with a warning of graphic content.

At one point, the video goes dark as the woman moves from the car to a police vehicle, although it continues to capture audio as the woman prays for the man’s life.

The shooting occurred the same day that the US justice department opened a civil rights investigation into the fatal shooting Tuesday of a black man by police in Baton Rouge, Louisiana. As in the Minnesota case, the encounter was captured in a searing video that was seen repeatedly on television and social media and reignited contentious issues surrounding police killings of African-Americans.

The victim in Louisiana, Alton Sterling (37), was killed early on Tuesday as two white police officers responded to a call about an armed man. The officers had Sterling pinned to the pavement when at least one of them shot him. The terms #FalconHeightsShooting and #PhilandoCastile were trending on Twitter early on Thursday as news of the encounter spread.