Tony Blari has again expressed his regret on the aftermath of the Iraq invasion on BBC Radio 4 inverview. Video: BBC Radio 4 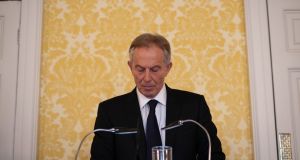 Former Prime Minister, Tony Blair speaks during a press conference at Admiralty House on July 6th, where responding to the Chilcot report he said: “I express more sorrow, regret and apology than you may ever know or can believe on July 6, 2016. in London, United Kingdom. Photograph: Stefan Rousseau/Getty Images

Tony Blair is facing growing calls to be brought to court over his role in taking Britain to war with Iraq following the damning verdict of the Chilcot Report.

The former prime minister has been put on notice by families of dead servicemen that he may face legal action over what flowed from his decision to tell US president George Bush “I will be with you whatever” eight months before the 2003 invasion.

Meanwhile shadow Commons leader Paul Flynn said the Iraq Inquiry’s findings amounted to an “utter condemnation” of Mr Blair’s “terrible” decision to commit British troops to the US-led invasion and prosecution of the former statesman should be given “serious consideration”.

Former Scottish first minister Alex Salmond said he would like to see Mr Blair investigated by the International Criminal Court (ICC) for a crime of aggression and face parliamentary action to stop him holding public office again.

A former British ambassador to the UN has said the UK was “pushed” into entering military action too early by the US.

Foreign secretary Philip Hammond will face questioning on the implications of the report’s devastating findings for Britain’s future role in the world when he appears before a Commons committee on Thursday.

A defiant Mr Blair refused to accept accusations from service families that he had been wrong and reckless as he insisted he would make the decision to go to war again if presented with the same information about the threat posed by Iraqi dictator Saddam Hussein at the time.

Mr Blair’s stance was at odds with the report’s finding that war was not the last resort, but that Britain triggered military action before all options for a peaceful resolution to the crisis had been exhausted.

Families of some of the 179 military personnel killed in Iraq described the former PM as a “terrorist”, and Jeremy Corbyn offered an apology on Labour’s behalf for what he branded “a stain on our party and our country”.

But Labour leader Mr Corbyn stopped short of calling for his predecessor to be tried for war crimes, as some had expected.

Mr Blair insisted he could look the families in the eye — and the nation — and state that he did not mislead anyone over the invasion, the service personnel did not die in vain, and he was right to do what he did.

The long-delayed Chilcot report insisted Saddam Hussein posed “no imminent threat” at the time of the invasion, and the war was unleashed on the basis of “flawed” intelligence.

And in a withering assessment of its aftermath, the probe found the military intervention ended six years later “a very long way from success”, with the “humiliating” spectacle of UK troops in Basra making deals with local militia who had been attacking them.

Mr Blair said he took responsibility for “mistakes in planning and process” identified by the report, and felt “more sorrow, regret and apology than you may ever know” for the grief of those whose loved ones died.

The report did not support claims that Mr Blair agreed a deal “signed in blood” to topple Saddam at a key meeting with Mr Bush at his ranch in Crawford, Texas, in 2002.

But it revealed that in July that year — eight months before Parliament approved military action — the PM committed himself in writing to backing the US president over Iraq, telling him: “I will be with you whatever.”

Military policeman’s father Reg Keys said it was clear Mr Blair “deliberately misled” the country and that his son Tom “died in vain”.

Roger Bacon, whose son Matthew was killed by a roadside bomb, said the families reserved the right “to call specific parties to answer for their actions in the courts”.

Speaking on his LBC radio show, Mr Salmond, now the SNP’s foreign affairs spokesman at Westminster, said he wanted action to be be taken against Mr Blair.

He added: “I’d like to see the ICC investigate a crime of aggression but I don’t think that’s going to happen.

“I’d genuinely like to see a prosecution for that offence in this country but I’m not certain that’s going to happen.”

Before the report’s publication the ICC said it was conducting a “a preliminary examination with respect to the situation in Iraq” to determine if an investigation should be launched.

It added: “An important distinction must be borne in mind between war crimes, which fall within the jurisdiction of the ICC, and the crime of aggression, which, at the present stage, does not. These are two very distinct crimes with their own legal elements of criminality.”

Sir Jeremy Greenstock, who was UK ambassador to the UN in 2003, told the BBC that Mr Blair had wanted a UN resolution backing military intervention in Iraq, but senior US officials thought it was a “waste of time”.