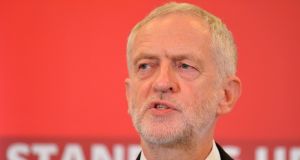 Relatives of British military personnel killed in Iraq have reacted with grief and anger to the Chilcot report, with the sister of one serviceman who died describing Tony Blair as a terrorist.

Sarah O’Connor, whose brother Sgt Bob O’Connor died with nine other airmen when their aircraft was shot down over Baghdad in 2005, was cheered by other bereaved relatives during an emotional press conference after the report’s publication.

“There is one terrorist in this world that the world needs to be aware of, and his name is Tony Blair, the world’s worst terrorist,” Ms O’Connor said.

Ms O’Connor was among two dozen bereaved relatives who were at the Queen Elizabeth II conference centre in Westminster yesterday for Sir John Chilcot’s presentation of the report. As hundreds of anti-war protesters chanted denunciations of Mr Blair outside, the relatives said Sir John’s report had been worth the seven-year wait.

“Now we can turn and say we have got the proof, we’ve got it in our hands. Twelve years of fighting for my son have been worth it. I’d do it again if I had to,” said Rose Gentle, whose son Fusilier Gordon Gentle was 19 when he was killed by a roadside bomb in Iraq.

In the House of Commons, David Cameron said the report carried lessons for future governments, principally that taking the country to war should always be a last resort and should only be done if all credible alternatives have been exhausted. He recalled that, on entering office six years ago, he had established a national security council (NSC) and appointed Britain’s first national security adviser, to ensure that all the key parts of the national security apparatus are joined up.

“I would argue also that the culture established by prime ministers matters too. It is crucial to good decision making that a prime minister establishes a climate in which it is safe for officials and other experts to challenge existing policy and question the views of ministers, and the prime minister, without fear or favour. There is no question today but that everyone sat around the NSC table is genuinely free to speak their mind,” he said.

He warned, however, against drawing the wrong conclusions from the report, arguing that Britain should not shy away from supporting the United States in future military action if their common security interests are under threat. He said Britain should speak frankly to the US and not hesitate to disagree in a spirit of friendship.

“Finally, we should not conclude that intervention is always wrong. There are unquestionably times when it is right to intervene, as this country did successfully in Sierra Leone and Kosovo. I am sure that many in this House would agree that there have been times in the recent past when we should have intervened but did not, such as in failing to prevent the genocides in Rwanda and Srebrenica” he said.

Labour leader Jeremy Corbyn described the decision to invade Iraq as the most significant foreign policy decision taken by a British government in modern times. He said it divided the House of Commons and set the government of the day against a majority of the British people, as well as against the weight of global opinion.

“Frankly, it was an act of military aggression launched on a false pretext, as the inquiry accepts, and has long been regarded as illegal by the overwhelming weight of international legal opinion. It led to the deaths of hundreds of thousands of people and the displacement of millions of refugees,” he said.

“It devastated Iraq’s infrastructure and society. As the report indicates, the occupation fostered a lethal sectarianism that turned into a civil war.”

Although some Labour MPs echoed Mr Corbyn’s criticism of the war, others argued that Mr Blair acted in good faith.