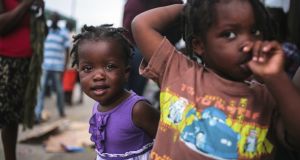 Children are among hundreds of African migrants who have arrived in Paso Canoas at the border between Costa Rica and Panama where they wait to continue their migration to the US. Photograph: Arnaldo Gonzalez

Set amid rice plantations and small hills, Paso Canoas on the Costa Rica-Panama border is a typical frontier post. Thick grey clouds drift down from the forested hills flanking the town, and thunder growls in the distance.

An endless stream of people – backpackers, traders and travellers – cross the border from Panama by foot and, under an enormous tin roof, crowds wait for buses on creaking plastic chairs. Cars and lorries rumble past the squat, low-rise buildings carrying weary passengers and bulky goods, stopping only to exchange their papers and pass through a decrepit carwash before continuing on into Costa Rica.

A short distance from the centre in a dusty, fenced and gated field, a collection of tents and gazebos has sprung up, becoming home to about 300 African migrants, according to local officials. A length of tarpaulin is attached to some of the tents, stretched diagonally from the roofs to the ground to provide extra cover.

There are portaloos at the back of the land, but sanitation is a hole about 100m away and, in the hot humid midday heat, the smell of human excrement seeps into the camp and permeates everything. Groups of men stand around, talking or simply watching others pass by, while in the tents sit women, caring for infants. Off to one side a group of young boys play with a flat football.

The Costa Rican government says this is the first manifestation of a long-term influx of migrants from Africa who are trying to reach the United States as the global migration crisis reaches Central America. Several hundred people from a variety of countries have set up camp in Paso Canoas between Costa Rica and Panama since their passage north was blocked by the closure of Nicaragua’s border. They had travelled by air or boat to Brazil or Ecuador, where they then made their way north, traversing the Latin-American landscape sometimes by bus, but often by foot.

With Nicaragua unwilling to handle the number of migrants involved, many became stranded in Costa Rica. A resolution was desperately needed and, following weeks of negotiations, an agreement between Costa Rica, El Salvador, Guatemala and Mexico saw 5,000 Cubans transported over Nicaragua via plane.

However, thousands were left in Panama, and they began to be joined by a steadily increasing influx of Africans who, following the closure of Europe’s borders, were seeking a new escape route from the troubles back home. It soon became clear the crisis was far from over.

Visiting a reception centre that opened at the weekend, Costa Rica’s minister for communication, Mauricio Herrera, said his government was preparing a response for the long term. “This structured migration is like a river. You cannot block the river, because it will build up and up, and then the water will explode over. Maybe you can reroute it, but that does not eliminate it. The borders in Europe are closed, so now migrants are seeking a new route, and this is it.”

“We tried to move them for two weeks but they did not trust us,” Herrera said. “Now that we have moved them, it is a small victory.” He said many of the migrants were “desperate” and “very aggressive” owing to the fact they “suffer a lot”, and an armed police presence was on hand to break up sporadic scuffles.

Tired and angry, the men in the camp seem grateful for an opportunity to vent their emotions to outsiders. One migrant, who gave his name as Joseph, says he has been at the border for three weeks already and is frustrated with the conditions.

“Look at this”, he exclaims, pointing to the wooden pallet on which he sleeps, “this is all they have given us.” A flattened cardboard box is laid on top of the pallet in attempt to provide some comfort, but this he salvaged himself. He points to the gazebo which he is sleeping under. “This is made for the sun, not the rain. When it does rain we get wet,” he says, motioning to the five others who share the area with him, no more than six feet by six feet. As if to prove a point, it starts raining as we talk, and water leaks through the roof and in through the makeshift tarpaulin walls.

Another migrant living on the camp, who says his name is Jack, hopes to start a new life in the US, as do many of the others. “I want to go to university and study there,” he tells us. “I am not sure what I want to study yet, but there are many opportunities in America.”

When we asked if we could take pictures Jack said we could, but not of him. He did not want his family at home to see him in these conditions.

Sitting in the Paso Canoas police station, the rain hammering the grimy windows, Herrera accepts that conditions at the camp are “not good”.“But we do not have many funds. We need help,” he says.

For now, however, Costa Rica – with the help only of humanitarian organisations and charities – must bear the brunt of the crisis itself, a significant burden for a small Central American nation.