Away from political protest outside, the space pays tribute to the Rodez artist 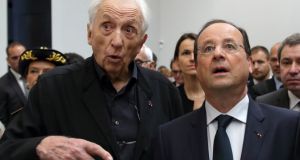 The museum is the architectural translation of the oeuvre of France’s best-known living painter, Pierre Soulages. Designed by a trio of Catalan architects, it comprises giant rusted steel cubes, the same Corten steel used by the US sculptor Richard Serra. Rodez’s 13th-century pink stone cathedral towers above, strangely in harmony with the science-fiction-like structure.

The riot police fired tear gas against the protesters while Hollande entered unseen through a side door. The morning edition of Le Figaro called Hollande “Mr 3 per cent,” because a poll showed only 3 per cent of the population want him to stand for re-election in 2017.

Meanwhile, the Confédération Paysanne farmers’ union kidnapped Hollande’s agricultural adviser, Philippe Vincon, who had accompanied the president from Paris. Vincon was held for four hours before being freed in exchange for the liberation of four militants who’d vandalised an industrial farm in northern France.

Pierre Bergé, the fabulously wealthy art collector and patron of the arts who was for decades the partner of Yves Saint-Laurent, also enlivened the museum inauguration, by suggesting in a tweet that Soulages was a minor painter who did not merit his own museum.

Soulages couldn’t care less. One of his outrenoir canvases sold for €5.1 million at Sotheby’s last year. In 2009, more than half a million people attended the “definitive” Soulages retrospective at the Pompidou Centre, also a record. Soulage’s average auction price has increased more than 500 per cent in the past decade, according to the New York Times.

In 1986, then culture minister Jack Lang asked Soulages to design stained-glass windows for the abbey of Sainte-Foy de Conques, 40km from Rodez and on the pilgrimage route to Saint-Jacques de Compostelle. The abbey drew so many tourists that the mayor of Rodez, where Soulages was born in 1919, asked if he could have the plywood models used to create the windows. The Soulages museum was born. With tourists in mind, the three-star Michelin chef Michel Bras added a restaurant.

Soulages became fascinated by light and shadow while walking to and from school as a boy in Rodez. He was an amateur archaeologist in adolescence, when visits to the prehistoric cave paintings of Lascaux and Chauvet made a deep impression. He met his wife, Colette, at the fine arts academy in Montpellier 72 years ago.

Though he will turn 95 next Christmas eve, Soulages has no intention of retiring. He can’t wait for the fuss over his new museum to subside, so he can return to his normal routine.

“I paint for myself, to have a reason for living,” he told Le Figaro. “When I don’t paint, I have the impression I no longer exist. Painting is a pleasure, always. An adventure, always. But an adventure experienced within what I am and love.”