Corruption flourishes across the continent due to dysfunctional political systems 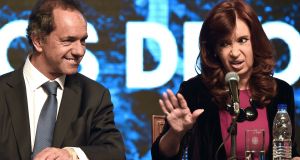 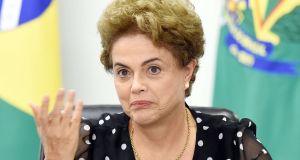 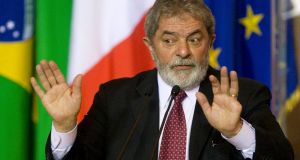 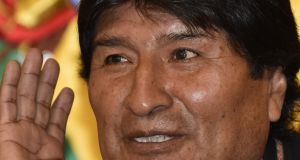 These are difficult days for South American presidents, with both serving and former members of this select group snarled up in a series of corruption scandals that once again highlight the sordid underbelly of the continent’s political culture.

In Bolivia, voters recently rejected a proposal to allow President Evo Morales run for a fourth term in office, his quest torpedoed by accusations that his former lover, Gabriela Zapata, used their relationship to illegally enrich herself.

A day later her sister revealed that her son with Morales did not die shortly after his birth, as the president had initially told the country.

Morales seems not to have known that the boy, now aged nine, was alive.

He has sought access to him while the whole country asks why his former lover hid the fact their child together did not die.

Almost unnoticed amid this personal soap opera was the admission by Morales’s government that while working for a Chinese company with multimillion-euro government contracts, Zapata had access to government buildings, even holding private meetings in the presidential palace.

Rousseff won by waging a cynical campaign of fear and misinformation that could now come back to haunt her after the arrest last week of her marketing guru, João Santana, as part of an ongoing Petrobras investigation.

Santana was once compared to Joseph Goebbels for his unscrupulous campaign spots smearing Rousseff’s rivals.

Police and prosecutors believe he was paid in part for his services by Odebrecht, one of the companies accused of looting Petrobras on Rousseff’s watch.

If proved, the charges would join the growing body of evidence that Rousseff’s re-election campaign broke the law, increasing the likelihood that Brazil’s top electoral court will cancel her mandate and force new elections.

Santana’s wife, who was arrested with him, claimed the payments had nothing to do with Brazilian politics and in fact were undeclared payments from Odebrecht for their work on foreign campaigns, including those of deceased Venezuelan president Hugo Chávez and his flailing successor, Nicolás Maduro.

Odebrecht has multibillion-dollar contracts in Venezuela, though why this meant it felt obliged to illegally fund election campaigns there can only be guessed at.

An investigation went in circles until it was dropped, but it has always been believed the cash was off-the-book funding for Cristina Kirchner’s presidential campaign.

Kirchner withdrew in December after eight years in office, during the course of which both the number of corruption scandals and her family’s fortune exploded.

She insists the two are completely unrelated phenomena, but she now faces having her affairs more closely examined without the help of a president’s influence to beat off awkward questions.

In a taste of what may lie ahead, Kirchner has been summoned to court in April for questioning about possible fraud in the sale of dollar future contracts at below market value by the central bank during the dying days of her administration.

His lawyers are seeking a writ of habeas corpus in order to prevent him being detained for questioning about several luxury properties that prosecutors have linked to his family.

Evidence is mounting that Odebrecht fitted out a country estate for the Silvas while a rival firm – already convicted in the Petrobras affair – took care of a triplex beach-front apartment.

Lula has failed to provide his Workers’ Party or the public any convincing explanation for his family’s affairs being unrelentingly exposed in the media.

Now that Santana’s wife has implicated them in some sort of illegality, Odebrecht executives who have languished in jail for months might be ready to provide the clarification Lula will not or cannot.

Meanwhile, Lula and his circle scored a victory this week in their bid to derail the investigation when their intense political pressure forced out the Workers’ Party’s justice minister, who they claimed had failed to rein in investigators.

What happens next across the region remains to be seen. Just yesterday it was reported that a senator under investigation told prosecutors as part of a plea-bargain agreement that Lula had sought to buy the silence of a former Petrobras executive, since convicted for corruption.

However, two lessons are already clear.

Firstly, the presidents forgot the political truism that, in moments of economic weakness, South American voters tend to get more riled up about corruption they were willing to overlook in times of plenty.

The current crop of scandals has gained traction now that the commodity-driven boom is over and tough economic times lie ahead.

All the serving and former presidents currently caught up in scandals entered office promising ethical government.

South American corruption is not just a question of dodgy personnel, but rather a systemic failing. Corruption is the motor oil that allows these flawed political systems to run at all.

And for all the investigations ongoing across the region, too little is still being done to address these systematic failings, of which even the best intentioned fall foul.