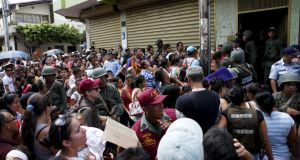 Venezuelan soldiers try to control the crowd queueing outside a supermarket while trying to buy staple items. An 80-year-old woman reportedly died in a scrum outside a state supermarket selling subsidised goods. Photograph: Carlos Garcia Rawlins/Reuters

An 80-year-old Venezuelan woman died, possibly from trampling, in a scrum outside a state supermarket selling subsidized goods, the opposition and media said on Friday.

The melee at the store in Sabaneta, the birthplace of former Venezuelan leader Hugo Chavez, was the latest such incident in the South American nation where economic hardship and food shortages are creating long queues and scuffles.

The opposition Democratic Unity coalition said Maria Aguirre died and another 75 people were injured - including five security officials - in chaotic scenes when National Guard troops sought to control a 5,000-strong crowd with teargas.

“Due to the shortage of food ... the desperation is enormous,” local opposition politician Andres Camejo said, according to the coalition’s website.

It published a photo of an elderly woman’s body lying inert on a concrete floor.

Mr Camejo said thieves had also attacked the crowd, members of which were seeking to buy cheap food on offer at an outlet of the state’s Mercal supermarket chain in Barinas state.

There was no confirmation of the incident by authorities.

El Universal newspaper reported that Ms Aguirre was knocked to the ground during jostling in the crowd, while the pro-opposition El Nacional said she was crushed in a stampede.

Another person was killed and dozens detained following looting of supermarkets in Venezuela’s southeastern city of Ciudad Guayana earlier this month.

President Nicolas Maduro accuses opponents of deliberately stirring up trouble, exaggerating incidents, and sabotaging the economy to try and bring down his socialist government.

Critics, though, say incidents of unrest are symptoms of the increasing hardships Venezuela’s 29 million people are facing due to a failed state-led economic model.