Migrants face hellish limbo in Libya before journey towards Italy

People-smuggling has its own illicit economics. Migrants may start off in holding pens 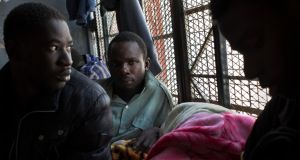 Migrants at the Abu Salim detention centre in Tripoli, where men sleep on pads completely covering the floors of two rooms, bedbugs swarming around them. Arab and African migrants are churning through Libya – where border security is nearly nonexistent, corruption is rampant and human smuggling operations are growing ever more callous and brazen – and boarding boats to cross the Mediterranean. Photograph: Tyler Hicks/New York Times 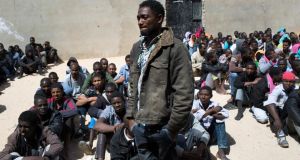 Young migrants at a detention centre in Zawiyah, Libya. The multiplying tales of death at sea have done nothing to diminish the demand for crossings. The western end of the Libyan coast is just 290 miles from the Italian island of Lampedusa. Photograph: Tyler Hicks/New York Times 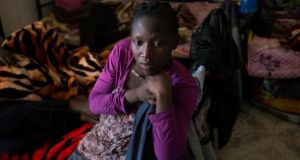 The two eight-year-old Eritrean boys had ridden for days across the deserts of Ethiopia, Sudan and Libya, packed in the back of a truck with two other children and a dozen adults. Then they spent another month trapped in a crowded farmhouse the smugglers used as a pen to store their human cargo.

Finally, in the dark of night, a rubber dinghy ferried the two boys, Hermon Angosom and Efrem Fitwi, out to a creaking fishing boat jammed with more than 200 others, including 39 children – the youngest a two-year-old in the arms of his mother.

Both cried. “We were afraid of the boat,” Hermon recounted impassively. The boys had joined the unceasing flow of Arab and African migrants churned through the lawlessness of post-Gadafy Libya and spewed out into the Mediterranean – more than 170,000 last year and at least as many expected this year. It is a journey through a failed state in which border security is all but nonexistent, corruption is rampant, the coast guard rarely leaves port and the proliferating human smuggling operations are growing ever more callous and brazen. Human trafficking from Libya across the Mediterranean was a $170 million (€155 million) business last year, according to estimates in a recent UN report.

Since the overthrow of Muammar Gadafy in 2011, warring militias have become the only law in much of Libya. Smugglers have “nothing to be afraid of”, as one put it, because security along the coast has disappeared. And the multiplying tales of death at sea have done nothing to diminish the demand for crossings.

African migrants who came for menial jobs are increasingly desperate to move on because of the deadly fighting among Libyan militias, the near collapse of the economy, and the robbery and abuse of dark-skinned Africans by Libyan militia fighters.

Others from across Africa pay desert smugglers to carry them to the Libyan coast just for a chance to get to Europe and the better lives they imagine there. Most are ferried blindly through Libya by armed gangs under the protection of powerful militias. Some fail to make it out of Libyan waters and end up stuck in a hellish limbo, unable to return home and trapped in the country’s chaos. Many are not that lucky.

Roughly 1,750 of about 25,000 migrants trying to cross to Italy from Libya drowned in the first weeks of the spring sailing season, according to the International Organisation for Migration, an intergovernmental agency based in Geneva. That includes more than 700 in a boat that capsized on April 19th. The death rate is more than three times higher than last year, when about 3,200 drowned out of approximately 170,000 who tried the same passage.

But many still pay for the chance, two smugglers said in separate interviews. “The Africans are seeing death in front of their eyes” because of the abuse and violence of the Libyan militias, one smuggler said, sipping a cappuccino at a harbourside cafe in Tripoli, the capital, and speaking on the condition of anonymity because his trade is a crime.

“Even if there is a 99 per cent chance that they are going to die at sea, they are still going to do it,” he said, “because they are just fed up.” The smugglers have become increasingly cynical about their human freight. “Most smugglers do not care about God,” the smuggler said, “so they just throw a lot of migrants inside the boat – the more, the better for them.”

He insisted he had never lost a passenger, but his assessment of the dangers seemed at odds with the death toll. “It is well-known that the Italian boats save everybody,” he said. Smugglers and migrants said that a rescue by a European vessel in international waters – not reaching the Italian coast – was the goal of every departure. They said increasing the number of patrols, as the European Union has pledged, stood little chance of stemming the flow.

“A force on the sea will only save the migrants,” one smuggler said. “The problem is in the harbours of Libya.” But the Libyan coast guard is practically useless. Coast guard officials responsible for most of the coastline where the smuggling occurs say equipment failures have prevented them from carrying out an operation for more than three months, and at least one captain said he was afraid of retribution by the smugglers.

At the shortest distance, the western end of the Libyan coast is just 290 miles from the Italian island of Lampedusa, and emigration by sea has been a dream for years. But under Gadafy’s rule, the two smugglers said, the price of passage for one migrant ran as high as $5,000 (€4,500) because of the cost of evading – or bribing – the security forces.

That price has fallen as low as $1,600 in recent weeks, according to smugglers and migrants around Tripoli. Dark-skinned Africans sail for less than lighter-skinned Moroccans, Syrians and Tunisians, smugglers said, because the latter are assumed to have more money.

Cramming 200 or more migrants into a boat at $1,600 a head means more than $320,000, but the smugglers insisted there is a heavy overhead, mainly for bribing militias.

“Everything is expensive,” one smuggler said. Transporting migrants by road requires a bribe of more than $100 at each local militia checkpoint for each truck carrying 15 to 20 migrants. (Some migrants from other countries said they had paid as much as $1,600 just for the ride from Sudan to the Libyan coast at Ajdabiya and then west to the smuggling ports.)

A smuggler might pay as much as $5,000 a month to rent a crowded collection house where he can keep migrants while they wait to depart, paying a premium to the landlord because of the risk of retribution if the use is exposed. Smugglers must also pay guards. And it often costs as much as $20,000 a month to pay a local militia chief for permission to use a secure departure point.

A rubber boat to ferry groups of 20 migrants to a waiting vessel can cost $4,000, and a boat that holds 250 migrants for a one-way voyage can run up to $80,000. (Boat makers charge smugglers a premium, they complain.)

An Egyptian or Tunisian captain for the boat might get $5,000-$7,000, and blend in with the migrants to avoid responsibility if the boat is stopped, according to the smugglers. About $800 buys a satellite telephone the captain can use to call the Red Cross when the boat reaches international waters, to expedite pick-up by the Italian coast guard.

Migrants picked up in Libyan waters are sent to primitive detention centres. Most of the others held in the centres are dark-skinned Africans turned in by Libyan militiamen acting as police officers. The Libyans accuse them of entering the country illegally or committing a crime.

But the migrants say armed Libyans stop them at checkpoints or invade the crowded apartments they share to rob them of their savings and turn them in. Many accuse the Libyans of raping migrant women, but there are no courts to adjudicate such claims.

At a detention site in the Abu Salim area of Tripoli, dozens of migrants captured at sea were among about 300 men housed in two concrete bunkers stinking of urine and sweat.

Bedbugs swarmed around them. Each room had two toilets in the corner, and a trash-strewn cement trough with four spigots was the only means of washing their clothes or themselves.

Some said they had spent two months or more here or in similar centres, although they are sometimes hired as day labourers.

“We are like slaves,” said Abu Bakr Dixon (34), a Gambian held at the Zawiyah detention centre. He survived the capsizing of his migrant boat by clinging to an empty barrel with a friend until they were rescued; at least 61 others with him drowned.

Col Milud Jummah, the official in charge of the Abu Salim centre, directed men from one of the rooms to kneel in tight rows in the courtyard – a chance to get some sunlight, he said. Rows of barbed wire blocked off most of the outdoor space, and armed guards prohibited the migrants from moving around.

“Do not expect them to be normal humans,” Jummah said, explaining the heavy restrictions.

At the Zawiyah detention centre, Hermon and Efrem appeared to feel the same way. Both boys said they had sneaked away without telling their parents. They said siblings who had made the trip by boat to Italy from Libya had managed to send money for smugglers to bring their younger brothers to join them. None of the roughly three dozen Eritrean boys had any idea how they might get out of the detention centre or what their future might hold. But when asked if they wanted to return home to their parents, the answer was unanimous. “We want to go to Italy,” they said. – (New York Times service)