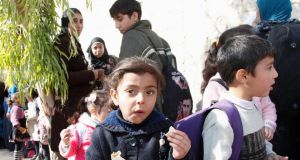 Before his meeting today with Syrian president Bashar al-Assad, UN-Arab League envoy Lakhdar Brahimi has warned of deep and lasting “Somalisation” of the country if bloodletting continues and there is no negotiated end to the conflict in which an estimated 115,000 people have been killed.

Mr Brahimi said Dr Assad could be part of the transition to a “new” Syria but insisted his powers must be handed over to a transitional government under the 2012 plan that is the basis of the US-Russian-sponsored peace conference scheduled for November 23rd.

Breakthrough
Today’s meeting could be a breakthrough as the two have not met since last December.

Dr Assad’s decision to grant the meeting suggests Damascus could drop conditions it stipulated for attendance at the conference. Damascus has said it rejects talks with armed groups and opponents with foreign connections, excluding everyone except opposition groups operating in Syria.

However, the prospects for the conference were dimmed by the dismissal of Syrian deputy prime minister Qadri Jamil – who belongs to a loyal opposition group and is close to Russia – for “overstepping” his role by holding unauthorised and unproductive weekend talks with US officials in Geneva.

While the expatriate opposition National Coalition is due to decide on conference participation on November 9th, 19 armed fundamentalist factions have said anyone who attends would be committing “treason”.

Experts from the Organisation for the Prohibition of Chemical Weapons have visited 21 of the 23 sites identified by the government and destroyed equipment for mixing chemical agents and filling shells in all but one of those inspected. The remaining sites are said to be in contested areas.

Syria has submitted a 714-page plan for elimination of its chemical arsenal, said to comprise 1,000 tons of mustard gas and nerve agents.

Separately, the World Health Organisation has confirmed that 22 children have been paralysed as a result of polio in the eastern province of Deir al-Zor, the first outbreak in Syria since 1999.

Highly contagious
The disease is highly contagious among children under five, especially in wartime conditions where vaccination has been suspended and water is contaminated.

In the province, 65,000 children under five are said to be particularly vulnerable. The city of Deir al-Zor is partly under government control while armed groups hold the countryside. Fundamentalist fighters from Pakistan and Afghanistan, where polio is endemic, are suspected of carrying the virus. Before the conflict, which began in March 2011, 91 per cent of Syrian children were vaccinated against diseases but the rate has fallen to 68 per cent.

There are three million children across Syria and hundreds of thousands among the millions of internally displaced and refugees.

On the battlefront, government troops retook control of the Christian town of Sadad north of Damascus as radical fundamentalists burned a church in the north of the country.

Rebels have fired mortars into a Christian quarter of Damascus, killing 32 people over the past two weeks.

Many Christians believe they are being targeted by radical fundamentalist jihadis.