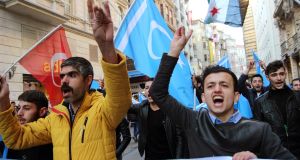 In that tiny corner of Syria close to the Turkish border are people for whom history has passed: ethnic Turkmens whose ancestors lived in modern-day Syria for almost a 1,000 years.

Syria’s Turkmens treasure a separate identity to their fellow countrymen and women; their heritage, historical language and identity is closer to Ottoman Turkey and other Turkic countries of central Asia than to Syria’s official Arabism.

More recently the Turkmens have opposed the Syrian regime’s brutal crackdown on the uprising of 2011 and today make up a robust rebel force of up to 10,000 fighters.

While one pilot escaped to government-controlled Syria, the other was killed. Alparslan Celik, a Turkish citizen fighting alongside Turkmen rebels, is believed to have been involved but remains remorseless. “My conscience cannot be bothered by a person who threw bombs at Turkmen civilians every day,” he said in an interview with the Hurriyet Turkish newspaper.

Turkey’s interest in the war in Syria is now in large part driven by the fate of ethnic Turkmens. While they have fought alongside the al-Qaeda-linked Jabhat al-Nusra against regime forces, the Syrian Turkmen Brigades, a leading rebel outfit in the northwest, have called for democratic governance in Syria and are chiefly concerned with protecting their villages around the strategic border region north of Latakia.

Turkey has played host to the Syrian Turkmen Assembly, a political organisation linked to the Syria Turkmen Brigades rebel group. Its president Abdurrahman Mustafa has attracted the direct backing of Turkey’s prime minister and far-right parties and groups including the Grey Wolves, a neo-fascist, militant youth group, but denies any close ties. “We have not any organic relationship with any political organisation in Turkey. Turkish NGOs, just as the Grey Wolves, give us humanitarian aid,” he said.

Ankara admits sending aid to Turkmen civilians in Syria “as a part of aid going to all Syrians” but a major scandal in recent years saw claims that Turkey’s state intelligence agency shipped weapons to Turkmen and other fighters in 2013 and 2014. A Turkish official, who asked not to be identified, refused to comment on potential military links between Ankara and Turkmen rebels, saying: “It is a military issue.”

Paul Levin, director of Stockholm University’s Institute for Turkish Studies, says president Recep Tayyip Erdogan is likely to be “livid” about Russian military activity so close to the Turkish border, which is in part targeting Turkmen civilians and rebel groups Ankara is reported to be covertly supporting.

“Russian bombarding and Assad’s forces capturing Turkmen villages thus evoke quite real sentiments of sympathy among many Turks. The Turkmens have also been besieged by Isis and the Kurdish PYD,” he said, referring to the leading Kurdish group in north Syria.

“[There is a] complicated relationship between the ultranationalists connected to the MHP and the religious nationalist groups connected to the AK Party. There is very real competition between the two as well as a flow of voters, but there also now appears to be a degree of collusion and collaboration,” said Levin of Stockholm University.

With Syrian regime forces backed by Russian jets taking back control of large pockets of rebel-held territory that includes Turkmen villages every week now, the draw for ultranationalists to Syria, who continue to see the Turkmens as being at risk of a massacre, is unlikely to dissipate.