Attack carried out by a Syrian national working with Kurdish militants, claims PM 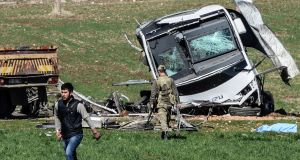 The bus damaged by a bomb detonated by remote control on a road linking Diyarbakir to the district of Lice . It followed Wednesday’s attack in Ankara, which left 28 dead. Photograph: Ilyas Akengin/AFP/Getty Images

Turkey has claimed Kurds based in Syria were responsible for Wednesday’s car bomb attack on a military convoy in Ankara, as another explosion hit a convoy in the south-east.

Turkish prime minister Ahmet Davutoglu alleged that Wednesday’s attack, which left 28 dead, was carried out by a Syrian Kurdish fighter with links to the People’s Protection Units (YPG), a Kurdish militia that has been supported by the US in the fight against Islamic State in northern Syria. The outlawed Kurdistan Workers’ party (PKK) assisted with the attack, he said.

“We collected intelligence all night,” Mr Davutoglu told reporters in Ankara. “The perpetrators have been fully identified. The attack was carried out by YPG member Salih Necar, who came in from Syria.”

Fourteen people have been held in connection with the attack.

Mr Davutoglu said Turkish intelligence had established where the militants had crossed into Turkey and how their networks were organised.

“This information will be given to all countries, primarily the five permanent members [of the United Nations Security Council],” Mr Davutoglu said, once more underlining Turkey’s opposition to the YPG’s participation at UN-brokered Syria peace talks in Geneva.

“The evidence that shows that the YPG is a terrorist organisation will be given to all countries. Just as we don’t sit down with al-Qaeda and Islamic State, we cannot sit down with the YPG either. Those that see Turkey’s enemy as their friend will lose Turkey’s friendship.”

The Turkish government has criticised its western allies, foremost the US, over their refusal to designate the Syrian Kurdish Democratic Union (PYD) and its armed wing, the YPG, as a terrorist organisation.

The head of the PYD denied allegations that it or the YPG was involved. “We have never heard of this person Salih Necar,” Saleh Muslim told AFP. “These accusations are clearly related to Turkish attempts to intervene in Syria.”

Turkey’s president, Recep Tayyip Erdogan, said the evidence pointed to the Syrian Kurdish group. “Despite the fact that their leader says they have nothing to do with this, the information and documents obtained by our interior ministry and all our intelligence organisations shows that [the attack] was theirs,” he said.

On Thursday morning a bomb detonated by remote control hit security forces travelling in a military vehicle on a road linking Diyarbakir to the district of Lice. The military said six people died and one was seriously injured.

Turkish artillery in the south of the country shelled positions of Kurdish fighters in Syria for the fifth day in a row on Wednesday, despite calls from both the US and Russia to cease all hostilities towards the YPG in Syria.

The co-leader of the PKK umbrella group, Cemil Bayik, was quoted by the Firat news agency as saying he did not know who was responsible for the Ankara bombing. But the attack, he said, could be an answer to “massacres in Kurdistan”, referring to the Kurdish region spanning parts of Turkey, Syria, Iraq and Iran.

Wednesday’s car bomb was detonated when a convoy of military buses carrying dozens of soldiers stopped at traffic lights in central Ankara. Plumes of smoke could be seen from all over the city rising from the scene, close to the headquarters of the Turkish military and the parliament.

Ankara has been on high on alert since October, when 103 people were killed in a suicide attack on a crowd of peace activists, the bloodiest attack in the country’s modern history. Last month 11 people were killed when a suicide bomber blew himself up in the tourist heart of Turkey’s biggest city, Istanbul.

Those attacks were blamed on Islamic State, as were two other deadly bombings in the country’s Kurdish-dominated south-east in 2015.

Turkey is waging an all-out assault on the PKK, which has repeatedly attacked members of the security forces with roadside bombings on their convoys in the south-east.

The PKK launched an insurgency against the Turkish state in 1984. It was initially fighting for Kurdish independence although now its aim is more focused on greater autonomy and rights for Turkey’s largest ethnic minority.