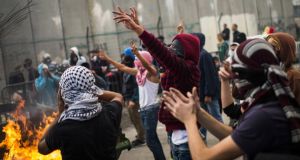 Riots spread across Arab neighbourhoods of Jerusalem yesterday after a Palestinian resident rammed a van into Israeli police and pedestrians, killing a border police officer and wounding a dozen other people.

The man was shot and killed by Israeli police after he stopped his van and started attacking people with a metal rod.

The attack, close to a light railway stop on the Route 1 borderline between Jewish west and Palestinian east Jerusalem, was almost identical to a similar incident in Jerusalem two weeks ago.

Before the attack there had been fierce clashes between Israeli police and Muslims on the Temple Mount in Jerusalem’s old city. Police briefly entered the Al-Aqsa mosque, Islam’s third holiest site, the centre of rising tension over recent weeks in the city. The Palestinians were protesting against a planned visit by about 100 Jewish activists campaigning for the right of Jews to pray on the Temple Mount, considered the holiest site in Judaism.

Hamas claimed responsibility for the attack, with spokesman Mushir al-Masri describing it as an act of revenge “for al-Aqsa and for the blood of those who guard Al-Aqsa”.

The perpetrator, Ibrahim al-Akari (38), a resident of the east Jerusalem neighbourhood of Shuafat, was a known Hamas member, whose brother was serving a life sentence for murdering an Israeli police officer until he was freed in a prisoner exchange deal.

Hamas, the Islamist movement that controls Gaza and is considered a terrorist group by the US, Israel and the European Union, said today’s attack was intended to avenge Palestinian deaths and alleged Israeli “violations” on the mosque compound.

US secretary of state John Kerry condemned yesterday’s attack. “That is not just a terrorist act but it also raises tensions,” he said.

Nabil Abu Rudeina, a spokesman for Mr Abbas, accused Israel of trying to escalate the situation and isolate the Al-Aqsa mosque.

“We warned that this is a red line that we cannot keep quiet about,” he said.

Both the Palestinians and Jordan intend to raise the question of the Temple Mount at the UN security council.

The Palestinians seek east Jerusalem as the capital of a future state, while Israel regards the whole of Jerusalem as its “eternal and indivisible capital”.