Life under Isis: ‘At night they came and picked the women’ 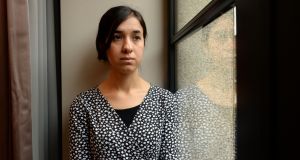 Nadia Murad: over a period of several weeks, she was repeatedly raped, beaten and humiliated. Photograph: Eric Luke

In early August 2014, Islamic State gunmen arrived in the village of Kocho, near Sinjar in northern Iraq, and forced about 80 local men to gather in front of the local school.

Kocho’s residents belonged to the Yazidi faith, one of Iraq’s oldest minorities, and found themselves among the first victims of what was to become a systematic campaign of killing and enslavement by the jihadists.

Nadia Murad, who was then aged 21, was brought into the school with the other women and girls, and from there they watched as the militants opened fire on their fathers, brothers and sons.

Six of Murad’s eight brothers were among those killed, she would later learn.

Murad and hundreds of other women were then put on buses and brought to the city of Mosul, which was under the control of Islamic State, also known as Isis.

The hour-and-a-half drive was the longest Murad had ever gone from Kocho; she had never had any reason to leave. “I went to school, I worked on the farm. All my life was that village,” she recalls.

In Mosul, Nadia, two of her young nieces and 60 other women and girls were placed in two rooms in a house that belonged to a Christian family but had been commandeered by the militants.

The girls who were already there told the new arrivals what awaited them. “Isis told us they were going to use us as sabayas [slaves]. That night they came and picked the women,” she says.

Separated from her nieces, Murad was “taken” by an Iraqi militant and brought to a building where he worked. Over a period of several weeks, she was repeatedly raped, beaten and humiliated.

On one occasion, when she tried to flee, a guard stopped her. “That night he beat me,” Murad told a meeting of the United Nations security council last December.

“He asked me to take my clothes off. He put me in a room with guards, who proceeded to commit their crime until I fainted.”

He and the other men “were proud of every rape”. Nor did she ever believe the enslavement of her and her fellow Yazidi women was a local or haphazard development. “It is a system. Isis is a system. They are all the same. It is not fractured. If there were differences within it, it would have had problems. No, it’s the same way of thinking.”

Murad says she was forced to recite verses from the Koran and, in a ceremony at an Islamic court in Mosul, to convert to Islam. “In my heart I said, ‘May God forgive me – I was born with this faith, I don’t want you to misjudge me,’” she says.

In her time in captivity, Murad saw and heard of “a lot of women” who took their own lives. The responsibility she felt for her two nieces – “the first time I ever had such responsibility” – kept such thoughts from her mind, she says. “And in my heart I thought it was not the right thing to do. To give up. I knew that justice was on our side.”

Some days after her foiled escape, an unlocked door gave her an opportunity to flee. Murad took it and ran.

Several other girls had been returned to the jihadists by local people, but Murad was fortunate to be taken in by a family that decided to help her flee.

The father prepared a fake Islamic State ID in his wife’s name, dressed Murad in a niqab and drove her to the border with Kurdistan, where she made her way to a refugee camp and was reunited with one of her two surviving brothers. It was only then she learned that her mother had also been killed.

Smart, poised and articulate, Murad – now 23 –lives in Germany and has become a global advocate for the Yazidi community, whose expulsion from the Sinjar region from 2014, followed by mass killings and sex slavery, brought worldwide revulsion.

Notwithstanding worldwide shock at Islamic State’s barbarous treatment of the Yazidis, the community itself, traumatised by a wave of killings that is estimated to have claimed the lives of 5,000 men and boys, continues to face appalling difficulties.

Many Yazidi towns and villages remain under Islamic State control, while Yazidi families, fearful for their safety in an unstable region riven by local political rivalries, have been slow to return to liberated areas.

Many live in dire conditions in overcrowded refugee camps.

On a visit to Dublin this week, Murad urged the Irish Government to press for the establishment of protected zones for vulnerable minorities as part of any settlement to the conflicts in Iraq and Syria.

Efforts to persuade the UN Security Council to send investigators to Iraq to look into the ethnic cleansing programme, with a view to gathering evidence for future prosecutions at an international tribunal, have so far been unsuccessful.

Above all, Murad says, she wants to know that killers, captors and rapists will be brought to justice.

“I would like to go back to Kocho. I don’t want to live anywhere else,” she says when asked about her hopes for the future.