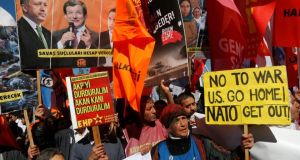 Protesters against any possible Turkish action in Syria demonstrate in front of the Turkish Parliament in Ankara today. Photograph: Umit Bektas/Reuters

Islamic State (IS) insurgents in Iraq have carried out mass executions, abducted women and girls as sex slaves and used child soldiers in what may amount to systematic war crimes that demand prosecution, the United Nations said today.

A report based on 500 interviews with witnesses said Iraqi government air strikes on the Sunni Muslim militants had caused “significant civilian deaths” by hitting villages, a school and hospitals in violation of international law.

At least 9,347 civilians had been killed and 17,386 wounded so far this year through September, well over half of them since the Islamist insurgents also known as Isis began seizing large parts of northern Iraq in early June, the report said.

“The array of violations and abuses perpetrated by Isil and associated armed groups is staggering, and many of their acts may amount to war crimes or crimes against humanity,” said UN High Commissioner for Human Rights Zeid Ra’ad al Hussein.

In a single massacre on June 12th, the report said, about 1,500 Iraqi soldiers and security officers from the former US Camp Speicher military base in Salahuddin province were captured and killed by IS fighters.

However, the bodies have not been exhumed and the precise toll is not known. No one disputes that Iraqi military recruits were led off the base near Tikrit unarmed and then machine-gunned in their hundreds into mass graves by IS, whose fighters boasted of the killings on the internet.

Meanwhile, IS insurgents today pushed on with their assault on a Syrian border town despite coalition air strikes meant to weaken them, sending thousands more Kurdish refugees into Turkey and threatening to drag Ankara into the Syrian conflict.

Kurdish militants warned that their ongoing peace talks with the Turkish state would come to an end if the Islamist insurgents were allowed to carry out a massacre in the predominantly Kurdish town of Kobani, pressuring Ankara to act.

IS fighters have taken control of hundreds of villages around Kobani, beheading civilians in a bid to terrorise villagers into submission, and have advanced to within kilometres of the town on three sides.

US led forces, which have been bombing IS targets elsewhere in Syria since last week, hit a village just south of Kobani yesterday and further strikes were heard overnight, Kurdish sources in the town said. But they seemed to do little to stop the Islamists’ advance.

The Britain-based Syrian Observatory for Human Rights, which monitors Syria’s war, said heavy clashes between IS and Kurdish YPG fighters had been continuing on Kobani’s eastern and southeastern outskirts for the last 36 hours.

Turkey’s parliament will vote later on a motion which would allow the government to authorise cross-border military incursions against IS fighters in Syria and Iraq, and allow coalition forces to use Turkish territory.

But President Tayyip Erdogan insists air strikes alone will not contain the IS threat and is calling for the ouster of Syrian President Bashar al-Assad, an aim not shared by the US-led military coalition.

Turkey accuses Mr Assad of stoking the growth of IS through sectarian policies and believes the instability on the two states’ 900km (560 mile) border will only deepen if he clings to power.

It is also reluctant to take action that may strengthen Kurdish fighters allied to the Kurdistan Workers Party (PKK), a militant group that has fought the Turkish state for three decades and with which it is conducting fragile peace talks.

The PKK is designated a terrorist group by Turkey, the United States and EU.

IS has carved out swathes of eastern Syria and western Iraq in a drive to create a cross-border caliphate between the Euphrates and the Tigris rivers, terrifying communities into submission by slaughtering those who resist.

The US has been carrying out strikes in Iraq against the militant group since July and in Syria since last week with the help of Arab allies. Britain and France have also struck IS targets in Iraq.