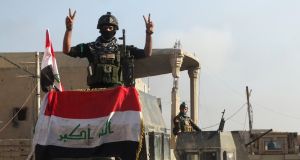 A member of the Iraqi security forces at a government complex in the city of Ramadi after driving out Isis fighters on Monday. Photogaph: Reuters

Iraqi forces appeared poised to regain control of the city of Ramadi on Monday in what would be their most significant victory against Islamic State, although analysts warned that many difficulties still lay ahead.

State television broadcast footage of government soldiers raising the Iraqi flag over Ramadi’s main government complex, while a Sunni politician said Islamic State fighters were fleeing the city. But questions still remained over just how much of Ramadi, which Iraqi forces were forced to abandon in May, was under government control and just what was left of the city for civilians to return to.

“Militarily speaking, we can say that the city of Ramadi has fallen back into the hands of the Iraqi forces,” said Sunni politician Jaber Jaberi. “It is considered a fallen city because there is no resistance from Islamic State.”

Still, Iraqi forces had yet to enter some areas of Ramadi where Islamic State, also known as Isis, fighters had left explosives behind, Mr Jaberi said. Another Iraqi analyst, Hisham al-Hashimi, said that only 14 of the 43 neighbourhoods in central Ramadi were under government control.

“Getting a town back that you should not have lost in the first place is not going to matter very much if it has been completely destroyed,” said Anthony Cordesman, a military expert at the Center for Strategic and International Studies in Washington.

In a statement, Col Steve Warren, a US spokesman for the US-led coalition battling Islamic State, said the recapture of the government complex was a “significant accomplishment” that had been “the result of many months of hard work” and hundreds of air strikes.

According to a US summary of operations, coalition aircraft working with Iraqi forces struck several positions in the Ramadi area on Monday, including a “staging area” for Islamic State vehicle bombs.

The capture of the city centre reverses what was a major defeat for the Iraqi government back in May, when Islamic State fighters drove Iraqi forces out of the city, which lies to the west of Baghdad and is the capital of Anbar province.

Islamic State still holds the cities of Fallujah and Mosul and analysts were urging against any misplaced euphoria.

The problem in Ramadi was “only about one-fifth that of Mosul, and it took a year to rebuild enough of the Iraqi army to handle Ramadi”, he said. “So the path ahead could be slow.”

Sunni-Shia tensions also remained high, Mr O’Hanlon said, and would continue to complicate the fight against the radical Sunnis of Islamic State.

Ben Connable, a senior international policy analyst at the Rand Corporation in Washington DC, said developments in Ramadi marked a political and tactical success, demonstrating the capabilities of the Iraqi counterterrorism service.

“The ability to put a flag over the government centre does have some meaning,” he said, but “they are retaking an area that they have lost. It is not like we are seeing some great strategic victory here.”

The Iraqi forces still need to take territory to the north and east of the city if they are to minimise the risk of future reversals, Mr Connable added. Copyright: The Financial Times Limited 2015