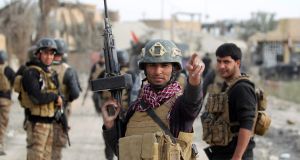 The complex has been a stronghold of Islamic State, also known as Isis, and its fall to government forces comes weeks after soldiers encircled the site and marked a significant victory that could pave the way to the recapture of the rest of the city, analysts said.

Some districts appeared to have been completely destroyed by the advance.

Iraqi sources said the latest operation by Iraqi forces – which included counter-terrorism forces and army divisions – is considered a significant success for the government and could help lead to the eventual fall of Ramadi.

“The Iraqi forces entered the complex a few hours ago and did not face any opposition from Isis.

“This shows that Isis withdrew to the northeast of Ramadi,” said Sajad Jiyad, an Iraq analyst.

“This is, of course, considered an achievement for the Iraqi forces given that there had been questions as to whether the forces, Iraqi police and army can take control of the situation through ground operations and resist Isis,” Mr Jiyad said.

The victory for the Iraqi army comes just days after a rare audio message attributed to Isis leader Abu Bakr al-Baghdadi, who said the ongoing strikes against Isis areas in Iraq and Syria would strengthen the group.

“Be confident that god will grant victory to those who worship him, and hear the good news that our state is doing well.

“The more intense the war against it, the purer it becomes and the tougher it gets,” he was reported to have said.

Jaber Jaberi, a Sunni politician, said the liberation of the government complex held a “psychological value”.

“This means that Isis has fallen and its fighters have fled from the complex.”

According to Hisham al-Hashimi, an Iraqi expert on Isis and Sunni insurgents, the government complex was the “first domino to be knocked over and the other pieces will follow”. – Copyright The Financial Times Limited 2015