The more Christians who die in conflict, the more the 10% minority is drawn in 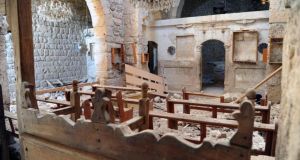 A damaged church in Maaloula village, northeast of Damascus in Syria. The recapturing of Maaloula and Yabroud – both areas with large Christian populations close to the Lebanese border – was crucial in preventing opposition forces from moving weapons and supplies between Syria and Lebanon. Photograph: AP Photo/SANA

Sari was driving through the Ghouta region east of Damascus last year delivering car parts to a customer when his car was stopped by several armed men. He was forced out of the vehicle, which was driven away along with his wares.

That was the moment the 25-year-old Christian from Saidnaya, 30km north of Syria’s capital, Damascus, decided to join the National Defence Forces – locally based pro-government militia groups armed by the Syrian regime.

Today, he’s a paid militia member operating as a frontline responder to rebel attacks on his mostly Christian-populated town – cannon fodder in a war that has drawn in international powers across the region.

“I wanted to fight because I love my country and I want to defend my town, where they [opposition fighters] used to kidnap people and ask for ransom,” he told The Irish Times.

“In the past, the armed people used to fire mortars into Saidnaya but we attacked their areas and killed a lot of their men and took their weapons. We succeeded in making Saidnaya safe from the mortars.”

With all but two national army divisions (the Alawite-dominated fourth division and the Republican Guard) long since diverted from the front lines to prevent defections, the Syrian regime has become increasingly reliant on civilians from minority religious groups to fight rebels.

Christian militias have been fighting on the side of the Syrian government since 2012, fearing an onslaught from the jihadi groups that emerged from the instability that accompanied the 2011 revolution.

In common with all other Syrians, Christians have seen themselves become targets in this war. Churches have been raided by opposition fighters while Christians in Damascus and elsewhere say kidnapping has reached epidemic levels.

In October 2012, a Greek Orthodox priest sent to negotiate the release of a doctor in Qatana, 24km west of Damascus, was killed. At the time, Christians in the town blamed rebel fighters for the priest’s murder. Two bishops kidnapped in April 2013 near Aleppo remain unaccounted for. Last July, Italian Jesuit priest Paolo Dall’Oglio, who was exiled by the Syrian government for criticising its crackdown on protesters, went missing in northern Syria and is believed to be held by an al-Qaeda-linked group.

Christian neighbourhoods, particularly in government-controlled Damascus and Aleppo, are subjected to months-long shelling campaigns from rebel forces occupying territory on the cities’ outskirts. Many say the regime intentionally attacks rebels from positions inside Christian districts to provoke rebel counterattacks and draw Christians further into the conflict.

According to Sari, whose full name is withheld to protect his identity, late last year government soldiers transported several truckloads of weapons to Saidnaya from the capital to be used to fight rebels approaching from the Qalamoun mountains.

In the battles that followed, he says about 200 opposition fighters attacked but failed to take the Cherebeen convent on a mountain outside Saidnaya last year. “We stopped them and we killed them but Christian guys from Saidnaya also died in the battle,” he said.

The regime has played a major role in stoking sectarian tensions, all the while holding itself up as sole protector of Syria’s Christian communities – about 10 per cent of the population.

“The Syrian government protects and provides Christian people with weapons and ammunition because they are loyal to Syria,” said Sari.

He says he took part in the regime’s successful offensives in Maaloula and Yabroud last October and November. At the time, he and “several hundred” Christian men from his town went to Maaloula to defend the churches and convents there.

After several days of clashes, the rebels were forced back in an important symbolic victory for local Christians.

The recapturing of Maaloula and Yabroud – both areas with large Christian populations close to the Lebanese border – was crucial in preventing opposition forces from moving weapons and supplies between Syria and Lebanon. It also means Hizbullah, the Lebanese Shia militia fighting in support of President Bashar al-Assad, has control of important border regions in both countries.

As more Christians die fighting for the regime, the community is set to become further involved in the conflict. Pictures of Sari and his friends on Facebook show them holding guns and dressed in fatigues, while notes mourning friends killed in fighting are also commonplace on social media websites.

Still, he says, there are opportunities for compromise.

“If the armed people want to face us with killing or with negotiations we are ready . . . But we in Saidnaya all have weapons and we fight with the government,” he said.

Using a local expression, he said: “We’re going to protect Saidnaya for as long as women give birth.”