Arab League agrees to help in fight against Islamic State

US president seeking an international coalition to challenge terrorist group 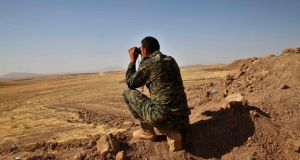 The Arab League has agreed to combat extremists such as the Islamic State group as one of its suicide bombers killed 16 people at a meeting of Sunni tribal fighters and security troops in Iraq.

The resolution, issued after late-night meetings of Arab foreign ministers a day earlier, does not explicitly back American military action against the group.

US president Barack Obama is seeking an international coalition to challenge the Islamic State group and is expected to outline his plan on Wednesday to the American people.

But the resolution, issued as a separate statement from a comprehensive one dealing with Arab affairs, reflected a new sense of urgency among the 22 member states to challenge the militant group that has seized large swaths of territories in Iraq and Syria.

The resolution calls for immediate measures to combat the group on the political, defence, security and legal levels. It did not elaborate.

The resolution backed the United Nations resolution issued last month that imposed sanctions on a number of the group’s fighters and called on countries to adopt measures to combat terrorism. The council resolution was adopted under Chapter 7 of the UN Charter, meaning it can be militarily enforced.

US secretary of state John Kerry is expected in the region this week to discuss details of the coming US policy.

Iraq faces an unprecedented crisis after the Islamic State group’s offensive, which included militants committing beheadings and mass killings while targeting minorities in the country.

In Monday’s attack, the bomber drove an explosives-laden Humvee, apparently seized from the Iraqi military, into the gathering of a major Sunni tribe, the Jabour, and security forces in Duluiyah, some 80km north of Baghdad, a police officer said.

The explosion killed 16 and wounded at least 55 people, the officer said. A health official confirmed the casualties.

The town of Duluiyah briefly fell to the Sunni-dominated Islamic State group for few days in July but the Jabour tribesmen, who have aligned themselves with the Iraqi forces in the battle against the extremists, took it back.

After the suicide bombing, militants crossed a small river on Duluiyah’s outskirts and attacked the town, setting off fierce clashes.

In an online statement, the Islamic State group claimed responsibility for Monday’s attack, saying two Saudi suicide bombers had targeted a police building and the gathering of Sunni militiamen. The authenticity of the statement could not be independently verified, but it was posted on a Twitter account frequently used by the militant group. Iraqi officials confirmed only one suicide attack.

The rampage by Islamic State fighters has become Iraq’s worst crisis since the 2011 withdrawal of US troops. Iraqi security forces and Shiite militias have been fighting against the militants with assistance from US air strikes, which contributed to some progress on the ground.

After US air strikes, Iraqi security forces today retook the Anbar provincial town of Barwana, across the Euphrates River from the town of Haditha, about 220 kilometres (140 miles) north west of Baghdad.