‘We co-exist but don’t really know each other’ 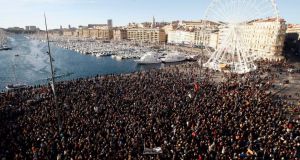 As tens of thousands gathered in Marseille’s old port yesterday in solidarity with the victims of a week of violence in Paris, the tributes pinned outside a nearby metro station provided some hints as to how this diverse city, home to one of France’s biggest Muslim populations, may handle any possible fallout.

In French and Arabic, various residents paid tribute to the dead in Paris and called for unity in the aftermath. Several wrote: “Je suis Musulman. Je suis Charlie [I am Muslim. I am Charlie]”. Another was blunt in their message to those who killed the Charlie Hebdo staff and afterwards shouted Allahu Akbar and claimed to have avenged the prophet Muhammad: “Your Islam is not our Islam.”

One protester wrote candidly about his own story: born Muslim in France to parents who practised Islam with what he described as “humility”, he warned against what he called homegrown terrorism. “We must be united against hatred.”

One of the biggest banners in yesterday’s march, which gathered an estimated 100,000 people as it wound its way through Marseille’s streets, read: “Muslims against fundamentalism”. Another banner, in French and Arabic, vowed “The terrorists will not win.”

It is estimated every fifth person living in Marseille, France’s second-biggest city, was born abroad and about every third resident is Muslim. They come mainly from former French colonies, particularly Algeria, Tunisia and the Comoros Islands.

Marseille has long been considered better at fostering social cohesion than other large French cities. When the suburbs of Paris and Lyon erupted in riots in 2005, Marseille stayed calm – proof, many residents say, that the city practises coexistence better than anywhere.

“More and more it seems like there are two Marseilles,” said Patrice, a local doctor. “One that appears to be on the up and the other that still struggles just to survive.”

The Marseille that struggles was the focus of one of the biggest political shocks of last year. A district in the city’s troubled northern flank, where tower-block housing estates dot the landscape, voted in a National Front mayor, Stephane Ravier, who was later elected to the senate. His victories have prompted fears that Marseille’s much-vaunted tolerance may be unravelling.

“People here co-exist but they don’t really know each other,” said Ahmed, a student at yesterday’s rally. He said there were not as many Muslims taking part in the march as he would have liked. “Some of my friends are completely appalled at the killings but they don’t want to celebrate a magazine they feel insulted them and their faith. That’s why they are not here today.”

Omar Djellil, a prominent Muslim activist, posted a banner on his Facebook page that read: “Je ne suis pas Charlie [I am not Charlie]” – a riposte to the slogan that has swept France and features on bus stops and news stands in Marseille. “To be Charlie is to say yes to these disgusting cartoons,” he wrote alongside some of the magazine’s most controversial images of the prophet Muhammad. “It is to say yes to intolerance!”

Considered something of a firebrand, Djellil’s personal story epitomises some of Marseille’s new contradictions. Once a Socialist, he later drifted towards the National Front because he found in it a reflection of his own social conservatism and his opposition to new immigrants. Djellil has played a key role in a campaign against Socialist election candidates who called for making Marseille a “gay-friendly city” and publicly expressed support for gay marriage.

In the meantime, the city’s estimated 300,000 Muslims worship in makeshift prayer houses in basements, warehouses and rented rooms.

Some are worried that hardline Salafists can more easily peddle their ideology in such an environment. “You see it visibly in some neighbourhoods – the type of beards and the type of veils they wear,” says Mahmoud, an Algerian-born merchant in his 60s. “It’s often a generational issue. People my age see it as alien to our experience.”

As Marseille feels itself pulled in several directions, the one thing that is still guaranteed to bring the city together is its football team. At a game last week the team donned black shirts as a mark of respect to those who died in Paris. “It was a powerful message,” said teacher Adrien as he marched yesterday. “We’re going to need many more like that.”