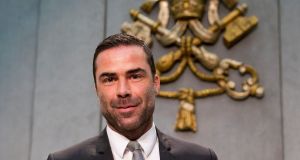 Rene Brulhart, president of the Vatican Financial Information Authority argued that the increased number of suspicious case reports was a direct result of the work of his own institution. Photograph:  Andrew Medichini/AP Photo

However, Swiss lawyer Mr Brülhart said these figures did not mean a sudden surge of illicit activity at various Vatican financial institutions.

Rather, he argued, a “report” did not usually lead to a judicial investigation, pointing out that since 2011, the authority has received approximately 900 such reports, of which 34 were referred to the Vatican’s promoter of justice (director of public prosecutions).

Mr Brülhart also argued that the increased number of suspicious case reports was a direct result of the work of his own institution, which, three years after its statutes were strengthened by Pope Francis, has only now begun to make itself felt.

The introduction to the report states:“This [increase in cases reported] was not due to a higher financial crime rate, but to a number of factors, namely: the closure of all accounts that no longer complied with Vatican legislation and with policies adopted by supervised entities; the monitoring of customers’ activities under foreign countries voluntary tax compliance programmes; and, in general, the strengthening of reporting mechanisms . . .”

Founded in 2010 by pope Benedict and then strengthened in 2013 by Pope Francis, the authority is a type of financial watchdog intended to independently carry out  the “supervision and regulation of entities carrying out financial activities [in the Vatican] on a professional basis”, especially in relation to money laundering and terrorism.

In effect, the authority oversees the affairs of the Vatican Bank, since two important organisations, namely APSA (the Vatican treasury) and Propaganda Fide (owner of a huge real estate portfolio) remain outside the authority’s remit.

Even if Mr Brülhart emphasised the bureaucratic aspect to the increased “suspicious” reports, the figures revealed by the report do not make for tranquil reading.

For a start, the report states: “In 2015, AIF forwarded 17 reports to the office of the promoter of justice.   In most cases, the alleged crimes involved were fraud, tax avoidance and tax evasion.

However, more serious financial crimes have been recorded, such as market disruption in foreign states”.

Asked to name names and indicate the nature of the “market disruption” and the states in which this had occurred, Mr Brülhart declined, pointing out that it would be incorrect of him to publicly discuss such cases, indicating that they were still under investigation.

1 Why Sinn Féin will not call the State by its name
2 Jury finds Harvey Weinstein guilty of sexual assault, rape
3 Coronavirus: Irish citizens advised not to travel to Italy’s affected areas
4 Maureen Dowd: For the White House parasite, all restraint has gone
5 Snow and ice warning issued as communities battle floods
Real news has value SUBSCRIBE