An angry mob outside of the Ukrainian parliament throws deputy Vitaly Zhuravsky into a rubbish bin. Video: Reuters 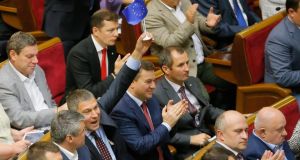 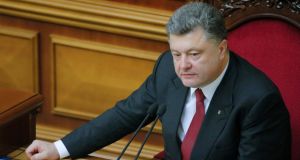 Ukrainian president Petro Poroshenko before this morning’s vote in the Ukrainian Parliament in Kiev. Ukraine’s parliament has ratified a landmark agreement on political association and trade with the European Union, the rejection of which last November by then president Viktor Yanukovich led to his downfall. Photograph: Sergey Dolzhenko/EPA

Ukraine ratified a sweeping agreement with the European Union today - an issue at the heart of the Russia-West crisis over its future - and sought to blunt the independence drive of Russian-backed separatists by offering them temporary and limited self-rule.

Although Ukrainian President Petro Poroshenko savoured a historic triumph with parliament’s seal of approval for the EU deal, his peacemaking efforts drew derision from separatists and some mainstream politicians, while his military reported three more deaths of Ukrainian servicemen despite an 11-day ceasefire.

“No nation has ever paid such a high price to become Europeans,” Mr Poroshenko told parliament referring to the bloody conflict that has gripped Ukraine since his predecessor, Viktor Yanukovich, walked away from the EU pact last November in favour of closer ties with Ukraine’s former Soviet master, Russia.

After Mr Yanukovich fled to Russia in February in the face of huge street protests, Moscow denounced a pro-Western “coup” against him, annexed Ukraine’s Crimean peninsula and subsequently backed armed pro-Russian separatists in eastern regions in their drive for independence from Kiev.

The chain of events has provoked the worst crisis between Russia and the West since the Cold War. The United States and its Western allies imposed sanctions against Moscow over a conflict with pro-Russian separatists in eastern Ukraine in which more than 3,000 people have been killed.

Just moments earlier, at a closed session of parliament, deputies voted in support of Mr Poroshenko’s plan to grant “special status’ to the ‘people’s republics’ proclaimed by the separatists.

Mr Poroshenko elaborated the plan after reluctantly agreeing to a ceasefire on September 5th following battlefield losses and heavy Ukrainian casualties which Kiev said were caused by Russian troops entering the fight on behalf of the rebels.

The law would grant self-rule to separatist-minded regions for a three-year period and allow them to “strengthen and deepen” relations with neighbouring Russian regions.

It would allow the heavily-armed rebels to set up their own police forces and hold their own local elections in December.

A separate law also crucially offered freedom from prosecution to separatists who have been fighting government forces - though there would be no amnesty for those involved in the July 17th shooting down of the Malaysian airliner nor people involved in purely criminal acts.

“These laws are an attempts to create a chance for the gradual peaceful settlement of the crisis in the Donbass,” political analyst Volodymyr Fesenko said.

“It has to be understood that other variants for the development of events are either freezing the conflict, or war in which Ukraine can lose the whole of the Donbass and possibly even more.”

But they quickly drew criticism from both sides.

Rebel leader Andrei Purgin told Reuters in the separatist-held city of Donetsk: “The basic part of the document which forsees us politically staying on Ukrainian territory - that is, naturally, not acceptable.”

“We will insist that any political unions with Ukraine are not possible now in principle,” Mr Purgin said, renewing charges against the Ukrainian military of violating the September 5th truce.

No breakdown of the parliamentary vote was given after the closed-door session.

Mr Poroshenko risks falling foul of his supporters in the pro-Western establishment if he is perceived as laying the ground for a permanent breakaway state within Ukraine and under Russian protection, similar to those in other ex-Soviet states such as Moldova and Georgia.

“I consider it absolutely wrong to vote capitulation after all these losses. We need peace, and not a truce - but not at any price. We consider these draft laws to be a complete capitulation,” said Oleh Tyahnibok, leader of the nationalist Svoboda (Freedom) party, before the session.

“No-one gave the President the right to put the fate of the people of the Donbass (the industrial east) into the hands of terrorists. If this law comes into force it will only lead to an escalation of the conflict,” Andriy Senchenko, a deputy of the Batkivshchyna (Fatherland) party, said before the closed session.

Incidents of mortar shelling in and around Donetsk continued to put the ceasefire under pressure and claimed further lives.

“The terrorists and Russian forces have stepped up their shelling of positions of the ‘anti-terrorist operation’,” said military spokesman Andriy Lysenko. Three more Ukrainian soldiers had been killed overnight, he told journalists.

A Reuters correspondent in Donetsk said that at least five mortar shells struck a funeral parlour and a car service station in the centre of Donetsk on Monday evening. Rebels said three people had been killed there.

“The truce is not being observed at all,” Leon, a local commander, said. “Latterly they (the Ukrainian army) have begun to shell apartments, houses, where there are civilians.”

The EU agreement on association and trade, whose ratification was synchronised with that of the European Parliament in Strasbourg, won unanimous support from the 355 deputies who took part in the vote.

Despite the Western sanctions against Moscow, the European Union and Ukraine agreed last Friday to delay implementation of the free-trade part of the EU deal until the end of next year in a concession to Russia.

Russia, which says its economy could be badly hurt by a sudden flood of duty-free EU goods onto its market via Ukraine, had threatened to slap import tariffs on Ukrainian goods from November 1st.

Under the ambitious agreement, Ukraine will continue to enjoy privileged access to the EU market until January 1st, 2016, but, in a concession by Brussels, it will not have to cut duties on imports from the EU in return.

Kiev had been concerned that allowing EU products more cheaply onto its market could undercut local goods, creating more problems for its weak economy.

Referring to this breathing space, Mr Poroshenko told parliament: “The national economy has got a year and a half to become competitive and ready itself for competition with European markets.

“Thank you Europe for this multi-billion bonus!”