Russian President Vladimir Putin says the four leaders agreed on main issues over Ukraine at the Minsk talks, including the ceasefire from February 15. Video: Reuters 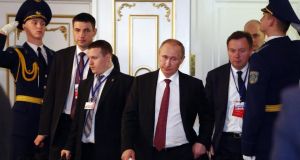 Germany, France, Russia and Ukraine agreed a deal on Thursday that offers a “glimmer of hope” for an end to fighting in eastern Ukraine after marathon overnight talks.

But the leaders of the four countries said there was a long way to go and accusations from Kiev of a new influx of Russian armour into rebel-held eastern Ukraine further undermined the prospects for peace.

The deal envisages a ceasefire between Ukrainian forces and Russian-backed separatists starting on Sunday, followed by the withdrawal of heavy weapons from the front line and constitutional reform to give eastern Ukraine more autonomy.

“The main thing which has been achieved is that from Saturday into Sunday there should be declared, without any conditions at all, a general ceasefire,” a visibly downbeat Ukrainian president Petro Poroshenko told journalists.

Emerging separately from more than 16 hours of negotiations, German chancellor Angela Merkel, one of the sponsors of the talks, differed with Russian president Vladimir Putin over the reasons they took so long.

Mr Putin accused Kiev of prolonging the talks, the culmination of a dramatic diplomatic initiative by France and Germany following an upsurge in fighting in which the separatists tore through an earlier ceasefire line.

Ms Merkel on the other hand said Poroshenko “did everything to achieve the possibility of an end to the bloodshed”, while she said Mr Putin put pressure on the separatists to agree to the ceasefire “towards the end” of the talks.

The deal offered a “glimmer of hope” she said, but big obstacles remained in the way of peace.

It is likely to ease pressure in the United States for Washington to send military aid to the stretched Ukrainian army, and from some in Europe for tighter sanctions against Moscow, due to be discussed at a European summit later on Thursday.

The agreement could also help protect Putin from any fallout from the deaths of Russians in the fighting, said by Ukraine to be soldiers. Moscow says they are volunteers.

More than 5,000 people have been killed in the conflict, which has now surged, with more than 70 Ukrainian servicemen and at least 24 civilians killed so far this month, according to Reuters calculations based on official Ukrainian figures.

A Ukrainian military spokesman said around 50 tanks, 40 missile systems and 40 armoured vehicles had crossed overnight into eastern Ukraine from Russia. It was not immediately possible to verify the figures, which were higher than in previous such statements. Moscow dismisses them as groundless.

The fighting has destabilised Ukraine militarily and economically. As the deal was reached, Ukraine was offered a $40 billion (€35 billion) lifeline by the International Monetary Fund to stave off financial collapse.

Russia’s economy has also suffered, from the sanctions imposed over its support for the separatists in eastern Ukraine and annexation of Crimea last year. Russian shares surged on Thursday after the deal was announced and the rouble gained, but then slipped back.

The agreement addressed some of the main stumbling points, including a “demarcation line” between separatists and Ukrainian forces, which the rebels wanted to reflect gains from a recent offensive which shredded an earlier ceasefire deal.

The compromise was that the rebels will withdraw weapons from a line set by the earlier Minsk agreement in September, while the Ukrainians will withdraw from the current frontline.

Ukraine will also get control of its border with Russia, but in consultation with the rebels and only after the regions gain more autonomy under constitutional reform by the end 2015.

The ceasefire and heavy weapons pullback would be overseen by Europe-wide security body the Organization for Security and Cooperation in Europe.

“We have managed to agree on the main issues,” Mr Putin told Russian reporters after the talks in the Belarussian capital Minsk.

“Why did it take so long? I think this is due to the fact that the Kiev authorities still refuse to make direct contact with the representatives of the Donetsk and Luhansk peoples’ republics,” he said, referring to two rebel-held regions in eastern Ukraine.

French president Francois Hollande said there was still much work to be done on the Ukraine crisis, but the agreement was a real chance to improve the situation. “The coming hours will be decisive,” he said later in Brussels.

Pro-Moscow separatists tightened the pressure on Kiev by launching some of the war’s worst fighting on Wednesday, killing 19 Ukrainian soldiers in assaults near the railway town of Debaltseve.

As the fighting escalated, Washington has begun openly talking of arming Ukraine to defend itself from “Russian aggression”, raising the prospect of a proxy war in the heart of Europe between Cold War foes.

Kiev and Nato accuse Russia of supplying separatists with men and weapons. Moscow denies it is involved in fighting for territory Mr Putin calls “New Russia”.

As the French and German leaders’ peace initiative was announced, pro-Russian rebels appeared determined to drive home their advantage ahead of a deal.

Armoured columns of Russian-speaking soldiers with no insignia have been advancing for days around Debaltseve, which has seen heavy fighting in recent days.