Demonstrators’ motives and party affiliations were not clear 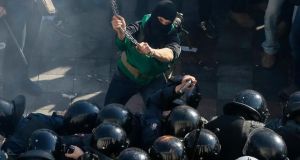 A radical protester clashes with police on Day of Ukrainian Cossacks in Kiev. Photograph: Gleb Garanich/Reuters

Ukraine approved sweeping laws yesterday to tackle corruption and curb Soviet-era state surveillance of political life ahead of a parliamentary election its pro-western leaders hope will push the country towards the European mainstream.

But violent clashes between police and protesters in the first real anti-government demonstration in Kiev since the “Euromaidan” upheaval last winter highlighted the potential for disorder in the run-up to the election on October 26th.

The demonstrators, many masked, threw smoke-bombs and used air guns to shoot out windows of the parliament building, forcing an early end to the session, which also voted in a new defence minister.

Their motives and party affiliations were not clear, though they appeared to be fringe nationalists. However, members of two nationalist parties who were nearby denied any links to the violence.

The laws backed by parliament are aimed at cleaning up Ukraine’s profile and heading off suspicions among critics, including in the EU, that Kiev is dragging its feet on reforms.

The new legislation, which tackles high-level graft and reforms the prosecutor general’s office, has been sought by the EU.

“The offshore era has ended,” prime minister Arseny Yatseniuk said, referring to laws under which government, judiciary and law enforcement officials will have to declare their own and their families’ assets and financial transactions. – (Reuters)

1 Orange weather alert issued as Storm Jorge set to batter Ireland
2 Coronavirus: One case confirmed in Northern Ireland
3 Clonlara case study: ‘Who the hell gave planning down here, day one?’
4 Predictions of ‘skin and hair flying’ as FG selects 13 of up to 60 Seanad hopefuls
5 Coronavirus: reinfection discovery may be blow to vaccine hopes
Real news has value SUBSCRIBE