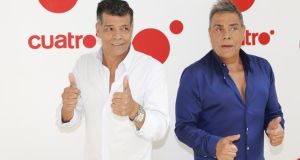 An overprotective husband watches his wife take a one-on-one swimming lesson and testily warns the young male teacher not to get too close to her in the pool; a flamenco dancer and his mother bicker about the costumes for an upcoming performance; and a man haggles aggressively over the price of some clothes with a shop owner.

These are all scenes from Los Gipsy Kings, a new Spanish reality TV show that is topping the ratings but drawing stinging criticism for allegedly reinforcing stereotypes about the Roma community.

Screened on Sunday nights, the programme has been drawing about two million viewers, who follow the trials and tribulations of four well-known Gypsy clans. Episodes include the painstaking plans of the daughter of one of the families ahead of her lavish 15th birthday party and a slapstick trip to New York by the musical duo Los Chunguitos. It’s something like a mixture of Big Brother and The Osbournes, although almost all the characters are from one ethnic minority.

Spain’s State Gypsy Council has denounced the show for “making spectacles of Gypsies and stigmatising the entire community, with the single aim of getting a large audience share”.

The programme has also divided opinion on social networks, with each episode drawing both adulation and fierce criticism.

It also claims they are shown as money-obsessed consumerists who fritter away their earnings, a notion, it counters, that is “contradicted by the difficult situation most Spanish Gypsy families are facing, given that they are the community most affected by the economic crisis”.

There are estimated to be between 750,000 and a million Gypsies in Spain. They first arrived in the early 15th century, having crossed Europe after originally coming from India. Frequently the target of persecution, their caló language and customs were banned for a time in the 16th and 17th centuries and they were often marginalised and harassed after that.

Since the death of dictator Francisco Franco in 1975 they have become more integrated into mainstream society, benefiting from public housing and education, and they are heavily associated with the international image of Spain, largely due to their links with flamenco.

But they still face discrimination. Twice as likely to be unemployed as other Spaniards, they have higher school drop-out rates and their life expectancy is eight years below average.

“The Gypsy community has had a huge influence on the development of Spanish society and identity,” Antonio Vázquez, who represents the organisations that make up the State Gypsy Council, told The Irish Times. “But we still suffer brutal inequalities compared to the rest of Spain.”

The makers of Los Gipsy Kings have defended the show, insisting that it was filmed without a sensationalist agenda.

Juan Andrés Maya is one of its main characters, a feted Gypsy dancer who runs a flamenco restaurant in Granada with his fearsome mother.

“I don’t think it misrepresents [Gypsies],” he told The Irish Times. “There are four families in the show and they are four families with different characteristics. In my case we are what you see in the programme: we’re modern Gypsies, struggling to get ahead and we’re constantly trying to grow our business . . . It’s not giving a false image from any point of view.”

But this is the second time recently that Cuatro, the channel that broadcasts the show, has faced such an outcry.

Even Maya said that Palabra de Gitano had exaggerated the Gypsy lifestyle, describing the programme as “cruel and pathetic”. He was particularly critical of a scene in which a young bride was seen to undergo a physically and emotionally gruelling Roma virginity rite.

There was further controversy last year, when the Royal Academy, which promotes and oversees the Spanish language, caused controversy by publishing a new edition of its dictionary with a definition of “Gypsy” that included the synonym “trapacero”, or “swindler”.

For Antonio Vázquez, this reflects a broader problem.

“There’s a mistaken perception of the Gypsy community in this country,” he says. “We’re thought of as swindlers, as people who do what we like, who don’t work like others do.” Slanted media portrayals, he adds, “condemn us to being marginalised and ostracised even more”.