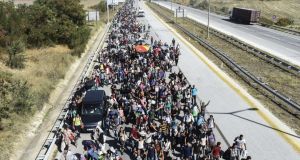 Syrians marching towards the Turkish border city of Edirne, where several thousand refugees are being prevented from entering Greece and Bulgaria. Photograph: Bulent kilic/Getty Images

But just down the road in Karaagac, the last town before Greece, police surround an anti-riot vehicle and man a checkpoint.

The Turkish border city of Edirne is today on the frontline of Europe’s growing migrant crisis, where several thousand refugees are being prevented from entering Greece and Bulgaria.

Here, thousands of Syrians are biding their time in the hope that the two border gates to Greece may soon open.

“I am here because I have no money to even go [to Greece] by boat,” said a man from Damascus using who gives his names as Abu Hussein. “But the dinghies are also very dangerous, of course.”

Abu Hussein left Syria two months ago as the sea route to Greece became increasingly favoured by those fleeing the country. “We faced rockets and snipers after dark,” he said. “It became normal life.”

Now a timeworn guesthouse at Edirne’s main bus station serves as a temporary home as he awaits the chance to cross into Greece. His hope is that one of the groups springing up on Facebook calling for a march on the border will force the hands of the Greek and European authorities and allow them peaceful entry.

“There is no future for us here,” he said. “They [Turkish authorities] won’t give us permanent residency. In any work they pay the Turkish people more than us, even if they’re not trained craftsmen, as I am.”

Declarations by Germany earlier this month that it would care for Syrians entering the country spiked hopes among refugees here, leading to increasing numbers descending on Edirne.

But both Greece and Bulgaria have closed their borders to Syrians. Checkpoints dot the highway leading into the city of 120,000 and police board buses to check that there are no Syrians or foreign migrants. At Istanbul’s main bus terminal, bus company employees say they are forbidden from selling Syrians tickets to Edirne.

As a result, hundreds began a highway march from Istanbul to Edirne early on Monday morning but were quickly stopped by police. Those who have made it out of Istanbul have done so by buying tickets to small towns close to Greece and then walk to the border.

Reports have emerged that Turkish authorities are enacting illegal refoulement, or the returning, of Syrians to the Bab al-Hawa Syrian crossing, and to Lebanon. A spokesperson at Turkey’s ministry of foreign affairs wouldn’t return calls to answer such claims, though Turkey’s prime minister, Ahmet Davutoglu, has called on Syrians to leave Edirne.

“The voices of our Syrian brothers have been heard by the entire world. They must now return to a normal life,” he wrote on Twitter on Monday.

A 1950s law prevents non-Europeans from claiming asylum in Turkey, and Syrians are regarded simply as “guests”, meaning Turkey can sidestep international laws and standards on caring for refugees.

For its part, Turkey says it has spent more than €5.8 billion on assisting some two million refugees fleeing war in Syria and Iraq.

“I was paid 30 lira [€6] a day on the construction sites even when Turkish teenagers, youngsters, were getting 50 lira,” Adel said. “What am I going to do with 30 lira a day?”

Adel and his family left Homs when a rocket came through his balcony and exploded in his living room. Today he says his hopes lie solely in decisions made at today’s emergency summit of EU leaders.

“I think, I hope, that they will decide to open the Greek border for us,” he said.

The odds are against this, with the discussion likely to focus on the proposal of a quota system for the intake of refugees across the 28-member union, even as half a million people are soon expected to attempt to leave Turkey for the EU.

Adel says he can stay one more day in Edirne. Then he will be forced to leave.