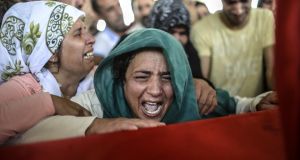 The mother of a victim cries for her son on his coffin during a funeral ceremony in Gaziantep on Tuesday, following a suicide bomb attack the day before which killed at least 32 in the southern Turkish town of Suruc. Photograph: Bulent Kilic/AFP Getty Images

Turkish prime minister Ahmet Davutoglu has rejected accusations that the country had in the past tacitly supported Islamic State (IS) militants operating from Syria – unwittingly opening the door to a suicide bombing that killed at least 32 people in Suruc on Monday.

The blast tore through a group of university-aged students from an activist group as they gathered in the border town ahead of a planned trip to help rebuild the nearby Syrian Kurdish town of Kobani.

Kobani has come under repeated assault from IS and been a rallying point for Turkey’s Kurdish minority, who have been enraged by what they see as the refusal of the ruling AK Party to intervene in a conflict played out within clear sight of Turkish military positions.

Thousands of foreign fighters have crossed through Turkey to join IS over the past few years, fuelling accusations from government opponents that it is turning a blind eye.

The US and other western allies have also urged Turkey, a Nato member that shares a 900km border with Syria, to do more to tighten security on the frontier.

Authorities have carried out a string of raids in recent weeks to arrest IS suspects. They have also blocked more than half-a-dozen Islamist news websites, prompting one group claiming allegiance to Islamic State to accuse Turkey of persecuting Muslims.

Anger among Kurds and their sympathisers has boiled over since the attack at Suruc.

Many of those killed were young Alevis, a minority community whose faith is a distinct branch of Islam, and who were politicised during anti- government protests in 2013, according to one survivor.

“They were living in more comfortable conditions in Turkey’s west, but had consciences and wanted to help the people of Kobani,” said Akdag (36), who travelled to Suruc to perform a play for refugees from Kobani. He escaped the bombing unhurt.

The Kurdistan Workers Party (PKK), militant group that has waged a three-decade insurgency against the Turkish state, said the AK Party bore responsibility for the bombing, accusing it of backing IS against Syria’s Kurds.

Pro-government media accused the Peoples’ Democratic Party, which draws most of its support from Kurds, of seeking to exploit the Suruc attack by provoking Kurds to take up arms, an accusation its leader, Selahattin Demirtas, has denied.

The identity of the Suruc bomber has not yet been revealed, but some media reports said a man from the southeastern province of Adiyaman was a prime suspect.

Mr Davutoglu said a suspect had been identified and his links were being investigated. – (Reuters)