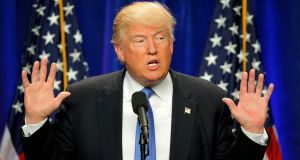 Donald Trump: “We have an incompetent administration, and if I am not elected president that will not change over the next four years – but it must change and it must change now”

Republican presidential candidate Donald Trump launched a blistering attack on President Barack Obama and his Democratic rival Hillary Clinton, blaming “dysfunctional” immigration policies that allowed the family of the Orlando massacre gunman into the US.

Mr Trump attempted to tie the policies of Mr Obama, supported by Mrs Clinton, to the early-morning attack on Sunday on the Pulse gay nightclub in Florida that left 49 people dead in the worst act of terrorism on US soil since the attacks of September 11th, 2001.

The Orlando gunman Omar Mateen (29) behind Sunday’s mass shooting was a US citizen born in New York to Afghan immigrant parents who moved to Florida when he was a young boy.

The billionaire New Yorker, the presumptive Republican nominee in November’s White House election, has said that the Orlando mass shooting justified his call for a temporary ban on Muslims entering the US, defending his proposal that has drawn such controversy.

“We have an incompetent administration, and if I am not elected president, that will not change over the next four years – but it must change and it must change now,” said Trump.

Mrs Clinton could not claim to be a friend of the gay community, he said, as long as she continued to support immigration policies “that bring Islamic extremists to our country”.

“She can’t have it both ways,” said Mr Trump.

In his address at a university in New Hampshire, the outspoken businessman accused Mr Obama and Mrs Clinton of damaging national security by restraining intelligence-gathering, failing to support law enforcement and to define threats as radical Islamic terrorism.

“They have put political correctness above common sense, above your safety, and above all else. I refuse to be politically correct,” he said.

Mrs Clinton went to new lengths to counter a key Trump attack on her, saying that she was not afraid to use the term “radical” Islam in speaking about threats to national security.

“From my perspective, it matters what we do more than what we say,” she told CNN, dismissing her Republican rival’s attacks on her and Mr Obama.

“And it mattered we got bin Laden, not what name we called him. I have clearly said . . . whether you call it radical jihadism or radical Islamism, I’m happy to say either. I think they mean the same thing.”

Orlando police chief John Mina told reporters that they decided to end a three-hour stand-off with Mateen after he claimed in telephone conversations with the police – falsely, as it later emerged – that he had explosives and accomplices inside the Pulse nightclub.

This information persuaded police that “further loss of life was imminent” leading them to blow a hole in a wall of the nightclub and carry out an assault that killed Mateen, said Mina.