Sarkozy joins Healy-Rae and Trump on grasp of climate change

‘Sahara became a desert, not because of industry’, says French presidential candidate 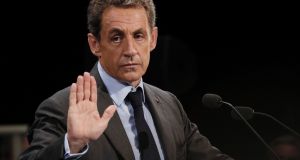 Former French president and candidate for next year’s presidential election Nicolas Sarkozy: “The climate has been changing for 4.5 billion years. Man alone is not responsible for this change,” he declared in a speech for the Institut de l’enterprise seen by AFP. Photograph: Thomas Samson/AFP/Getty Images

Former French president and candidate for next year’s presidential election Nicolas Sarkozy has joined the ranks of Donald Trump and Danny Healy-Rae as a climate sceptical politician.

The version of Mr Sarkozy’s remarks at the Institut de l’enterprise on September 14th provided to the Agence France Presse (AFP) by his campaign manager is slightly less extreme than quotes reported by Marianne magazine, which was also present.

“The climate has been changing for four billion years,” Mr Sarkozy said, as quoted by Marianne. “The Sahara became a desert, not because of industry. One has to be as arrogant as man to think it’s us who changed the climate.”

Mr Healy-Rae, the Independent Kerry TD, made a similar argument in the Dáil last May, saying that patterns of climate change went back over centuries, “before there was ever a combustible engine working in this or any other country” and that “God above is in charge of the weather and we here can’t do anything about it.”

The official version of Mr Sarkozy’s speech noted that the COP21 climate conference had taken place (last December in Paris). “But the climate has been changing for 4½ billion years. Man alone is not responsible for this change.”

Mr Sarkozy said he would prefer people discuss a “much more important subject: the demographic shock.” France ought to convene a conference on demographics, he said. “The earth has never known a demographic shock like the one that is coming, since there will be 11 billion of us in a few years. Man is directly responsible for that, and no one is talking about it.”

The US presidential candidate has called global warming a “Chinese hoax” and said cold winter weather debunks “global warming bulls**t.” Mr Trump would reverse US ratification of the Paris accord, which took place on September 3rd. He wants to revive the coal industry to make the US energy independent.

Mr Sarkozy supports fracking and wants to maintain the 39-year-old nuclear power plant at Fessenheim. “What are they afraid of, a tsunami on the Rhine?” he asked factory workers, alluding to the Fukushima disaster.

“Denying the effects of climate change amounts to obscurantism,” Ms Cosse said in her statement. “This is beyond the limits of decency . . . Voting for Nicolas Sarkozy puts us in danger.”

The French climatologist Jean Jouzel, a former vice president of the Inter-governmental Panel on Climate Change (IPCC), the leading authority on the subject, said Mr Sarkozy’s remarks were “pitiful” and showed his “contempt for the scientific community.”

In 2013, the IPCC reported a 95 per cent probability that human activity was responsible for global warming. A year later, the Commonwealth Scientific and Industrial Research Organisation said the probability was 99 per cent.