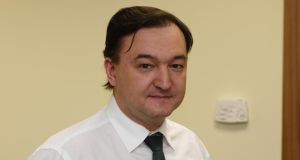 Sergei Magnitsky, a Russian lawyer, who died in a Russian jail after uncovering fraud among state officials

It is rare the joint Oireachtas committee on foreign affairs and trade hits international headlines but that is just what happened in the last week. The normally sleepy committee made its way into the New York Times , the BBC and Russian media as it waded into a high stakes war being waged ever since Sergei Magnitsky, a lawyer, died in a Russian jail after uncovering fraud among state officials.

The episode saw the committee consider and then back away from sanctioning Russian officials involved in the death. It has given a stark insight into the rough workings of Russian diplomacy and has pitted Irish families trying to adopt Russian children against international power politics.

The Oireachtas committee kicked off events when US businessman William Browder appeared before it in February describing what had led to the death of Magnitsky, who worked for his firm, Hermitage Capital.

After uncovering the theft by state officials of $230 million in taxes from the firm and testifying against them, Magnitsky was jailed and died a year later, in 2009. Russia’s own human rights council said he was denied medical treatment and was probably beaten to death. “It is my duty to his memory and his family to make sure that justice is done,” Browder told the committee.


Talking tough
Seven cross-party TDs and Senators just five days later put together a motion calling on the Government to introduce a law which would list the officials involved in Magnitsky’s death, freeze assets in Ireland and deny them visas. The move mirrored a law introduced by the US last December which Browder had also lobbied for.

The Russian ambassador to Ireland Maxim Peshkov was asked to appear before the committee to give his side of events but instead sent a letter warning that the motion put forward by the committee “will not enrich bilateral Russian-Irish relations and can have a negative influence” on an adoption agreement being negotiated between the two countries. The letter also stated publicly for the first time that a ban on adoptions by American families was passed in response to the US’s own Magnitsky Act.

It was not the first time Russia had threatened Ireland with an adoptions ban. In 2010 the Russian embassy also raised the issue after it emerged Russian spies had used data from Irish passports.

When the committee met in April Fine Gael TD Bernard Durkan proposed an amendment to the motion which dropped the sanctions. In an attempt to reach consensus, chairman and Fine Gael TD Pat Breen asked two committee members to draft a compromise motion.


Adoptions threat
When news of the threat to the adoptions deal emerged parents hoping to bring Russian children over here wrote to the committee. “Thousands of children remain in institutional care in Russia at a time when hundreds of Irish families who could give them a loving home . . . wait anxiously to adopt them,” said an email sent by the Russian Irish Adoption Group.

The committee last Wednesday unanimously approved a motion dropping sanctions and instead asking the Government during its EU presidency to raise the issue of Magnitsky’s death.

Some see the move as Irish capitulation over human rights. “It is regrettable that the Irish parliament has succumbed to blackmailing from Vladimir Putin’s regime,” says Vladimir Kara-Murza, member of the Co-ordinating Committee of the Russian Opposition.

Mr Kara-Murza told The Irish Times he wanted to see the EU take up the issue, which will not be easy.

A spokeswoman for the EU’s high representative on foreign affairs Catherine Ashton said it had “taken note of the resolution in the Irish parliament” and would “continue to call for a proper and thorough investigation of the circumstances of the death of Mr Magnitsky”.

In the European Parliament the liberal group of MEPs has been vocal on events in Ireland and wants the legislature to mount its own EU-wide sanctions. Since it is only the third largest group in the parliament this could prove difficult.

The events of the last few weeks have demonstrated the heavy-handed tactics of Russian diplomacy, says Neil Robinson, professor of Russian politics at University of Limerick. Ireland felt the full force of these because it is holding the EU presidency and the G8 summit is looming in June, when Moscow wants a focus on economics.

“They wanted to kill it off and were much more blunt and forceful than they would have been should the issue have arisen six months from now,” he said.