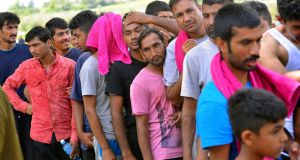 Migrants queuing at a reception centre near the Hungarian border in Subotica, northern Serbia, in July 2016. The closure of the “Balkan route” to migrants means asylum seekers and people smugglers are testing new ways to enter Europe. Photograph: Edvard Molnar/EPA

Romania’s coast guard has intercepted a fishing boat carrying scores of migrants off its Black Sea coast for the third time in as many weeks, highlighting the country’s growing role as a transit route for people trying to reach western Europe.

Countries on the main “Balkan route” from Greece to Austria sought to close their borders to refugees and migrants in March 2016, and EU and African states are now trying to stem the flow of people crossing the Mediterranean Sea to Italy and Spain, leading asylum seekers and people smugglers to test new ways to enter Europe.

Romanian officials said 87 people were onboard the boat that was stopped on Sunday and, like two vessels halted last month carrying a total of almost 140 people from the Middle East, it was believed to have set sail from the northern coast of Turkey.

The rising frequency of such migrant ships coincides with a sharp rise in illegal crossings of Romania’s land borders, with the first half of this year seeing five times as many foreigners detained at its frontiers than in the same period of 2016.

Romania’s government has tried to stem fears that the country of 19 million could face a major influx of migrants and refugees, while beefing up patrols along its eastern coastline and at its western borders, which migrants attempt to use as a way around the fence that Hungary built along its frontier with Serbia.

“Romania proves once again that it fulfils its international commitments. We treat migrants as people who need help, not as offenders,” said the country’s interior minister Carmen Dan, who visited the Black Sea coast guard on Sunday.

“But everyone will be checked to ensure that our safety is not put at risk,” she added.

“These migrants, families with young children in most cases, have fled their countries usually because war has destroyed their homes. But we have no understanding for those who profit from this situation and try to get rich by guiding them to European Union countries.”

Last month, foreign minister Teodor Melescanu said Romania was “massively participating in Black Sea operations aimed at stopping the refugee flow and rescuing those who dare to venture such actions”, and announced that his country had offered to take almost 2,000 refugees under a struggling EU relocation plan.

Romanian police have stopped dozens of migrants near its borders with Hungary and Serbia in recent weeks, and arrested several suspected people smugglers; last week, two migrants and a Romanian policeman were injured when a border patrol opened fire to stop a car evading a checkpoint.

Police say that about 2,500 foreigners were caught trying to cross Romania’s borders illegally in the first six months of 2017, compared to 1,624 in the whole of last year.

Migration experts say that very large numbers of asylum seekers are not likely to use the Black Sea route from Turkey to Romania, however, due to its bad weather, rough seas and tightening security in a strategic region where Nato and Russian forces keep each under close watch.