Rajoy plans to form Spanish government by end of July 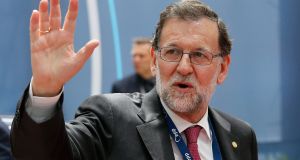 Mr Rajoy’s conservative Popular Party (PP) won the election, a rerun of December’s vote which failed to create a new administration, gaining 14 new congressional seats and a total of 137, but falling well short of a majority.

The Socialist Party came second with 85 seats, followed by the leftist Unidos Podemos alliance, with 71, and the liberal Ciudadanos, with 32.

In Brussels on Wednesday Mr Rajoy said he was planning to work “without hurry [but] without let-up” to gain the parliamentary support necessary to win an investiture vote and continue as prime minister.

The new congress takes office on July 14th and Mr Rajoy wants to win the vote before August, when Spanish political life shuts down.

“I’m open, I want to listen to everyone and I shouldn’t say beforehand what can be done or what can’t,” he said, in reference to possible pacts that might allow him to govern.

The acting prime minister’s determination to move swiftly contrasts with his response to the aftermath of December’s election, when he was an isolated, passive figure.

Back then, he even took the unprecedented step of refusing King Felipe’s invitation to face an investiture vote, arguing he lacked support.

But Mr Rajoy’s gains in this election have strengthened his position and bolstered his ambition of forming a so-called “grand coalition” with the Socialists, and, ideally, Ciudadanos.

However, it is still unclear whether those two parties would help him govern.

“We’re not going to support Mr Rajoy in an investiture vote,” said Socialist spokesman Antonio Hernando the day after the election, nor would the party even abstain in the ballot if it meant helping the PP, he added.

The personal chemistry between the acting prime minister and Socialist leader Pedro Sánchez is poor and any move that was seen to aid the PP would be politically risky for him. However, being seen to block a new government and therefore force a third election would also be costly.

Mr Sánchez’ own position is under scrutiny after posting the worst result of the party’s history on Sunday. He faces a meeting of the Socialist federal committee on July 9th, knowing pressure is building in some quarters for him to step aside.

The PP’s most natural ally, the liberals of Ciudadanos, are also reluctant to back the acting prime minister, although their resistance is specifically to Mr Rajoy himself, who is seen as having failed to tackle rampant corruption in his own party.

Ciudadanos leader Albert Rivera has been outspoken in this regard, saying earlier this week that “under no circumstance will we support a Rajoy government”.

However, a group of intellectuals who were among the co- founders of Ciudadanos have spoken out in an attempt to persuade Mr Rivera to soften his stance. There are signs he may have done so, with party spokesman Juan Carlos Girauta suggesting yesterday that if Mr Rajoy subjected himself to a confidence vote halfway through the legislature, Ciudadanos might help him govern.

By contrast, Unidos Podemos is not expected to figure in Mr Rajoy’s attempts to build parliamentary support, for ideological reasons.

The alliance between Podemos and United Left lost over one million votes on Sunday, highlighting rifts at the top of the former and casting into question the role of its leader, Pablo Iglesias.

“Now that Podemos and its leader have not only reached their ceiling but come back down, there are calls for a deep change that will open up the party to internal debate,” said an editorial in El País newspaper.