Vatican plays down concerns of threat from fundamentalists 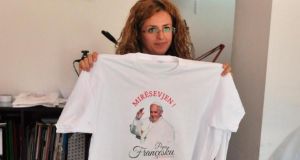 A woman holds a T-shirts bearing an image of Pope Francis and the word ‘Welcome’ a shop in Shkoder in Albania. Photograph: EPA/STR

Against the background of reported threats from Islamic fundamentalists, Pope Francis tomorrow makes a highly signficant day trip when he travels to Tirana, Albania, for his first official visit to a European country.

Last weekend, the Iraqi ambassador to the Holy See, Habeeb Al Sadr, said that there were serious concerns that unnamed fundamentalists were preparing to strike against the Pope. For its part, however, the Holy See has played down such speculation, saying that everything would proceed as normal, both this weekend and later.

From the beginning of his pontificate, Pope Francis has said that he will take his ministry to the periphery of the Church. This visit to a country which, under the leadership of hardline Stalinist Enver Hoxha became “the world’s first atheist state”, certainly falls within the periphery category.

Under Hoxha, Albania became not only the poorest country in Europe but one in which Christians, Eastern Orthodox and Muslims alike were persecuted for their faith.

Only 10 per cent of Albania’s population three million are Catholic, 60 per cent are Musim. The small Catholic community suffered greatly under the Hoxha regime, with more than 100 priests executed. On the plane on the way back from South Korea last month, Pope Francis himself explained the signficance of this trip, saying that there were two important reasons to go to Albania.

He wished to applaud the fact Albanians had been able to form a “government of national unity” which comprised Muslims, Eastern Orthodox and Catholics. He also wants to pay homage to all those who suffered under the Hoxha regime.

By tomorrow evening, he will be back in the Vatican, having made his point. As his spokesman Father Federico Lombardi said this week: “The Pope is not starting [his European visits] from Berlin, Paris or London. He wants to show his concern for those who are neither the most powerful nor the richest . . . There is no doubt about his interest in the margins . . .”

1 Coronavirus: Surge in cases still expected to hit hospitals in coming days and weeks
2 ‘Everyone still thinks it’s a joke’ - parents of toddler with coronavirus speak out
3 Coronavirus: Trump’s tone changes as US faces brutal loss of life
4 Coronavirus: Westmeath has highest rate of Covid-19 outside of Dublin
5 ‘Putin is crazy’: Russian leader lambasted over US coronavirus aid
Real news has value SUBSCRIBE